Communications has moved on a long way in the last few years for football clubs. With the plethora of social media that has become available it’s much easier for clubs to communicate directly with their fans without the need for the press. However, the flip-side is that it’s much easier for fans to air their disgruntlement right back as Blues are finding. 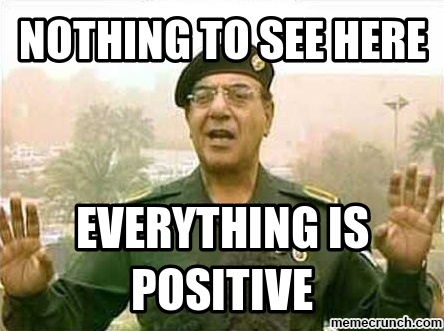 I’ve spoken about communications from the club before. It’s a tough job – and one that I certainly would never do – especially when Blues have won twice in 18 games and the manager is as popular as a pork chop in a synagogue.

This is how I see Blues right now.

For example, there was the story in the Birmingham Mail about changes being made to training.

The club were clearly not happy with this story, refuting it strongly on the official site. The article directly quotes Gianfranco Zola as saying the story was lies.

“Being very open, what I don’t like is the lies in stories. I read an article in a newspaper. It’s not true. I didn’t change the regime or the work.

I don’t know the source of the Birmingham Mail story so I can’t really say who is telling the truth on this one. However, what I do know is that when a football club takes on the local press there is only ever one winner … and it’s never the football club.

I’m sure that there are people out there who will be ready to have a go at the Birmingham Mail for “doing the club down”. I can’t agree with that – I think the Mail have the job of reporting on what is happening at the club and as long as they do that impartially, with balance then we have to accept that sometimes the stories coming out of the club aren’t what we want to hear.

I thought Brian Dick was brave last week to actually go with a piece about why Zola must go. Brave because it no doubt put him in the dog house with the club – yet what he wrote was balanced and fair. I sincerely hope that the club recognise that Brian is doing his job and don’t give him a bad time for voicing what many fans seem to think.

I do feel for the communications people because they’re in a no win situation. This is an important phase of the season marketing-wise; the run up to season ticket campaigns along working on renewals of commercial deals for the new season. The club have to be positive to ensure that they can maximise their earning potential but there isn’t much to be positive about.

Right now, the man who needs to step up to the plate is Panos Pavlakis.

We’ve not heard much from Panos of late. I can understand that with some of the crap he’s taken on social media he might not want to stick his head above the parapet but unfortunately, that is his job. If you’re willing to take the bouquets when everything is rosy then you have to take the brickbats when it’s gone Pete Tong and front up.

I’d certainly have more respect for him if he went on record on Radio WM or similar rather than hiding behind pithy 140 character tweets.

Likewise, it would be nice if someone connected to TTA made a statement but I think we’ve got more chance of Stan Collymore professing his undying love for St Andrew’s.

Things clearly aren’t fine. Question is, who is going to step up and sort them out?