Documents from Companies House confirm that a new subsidiary of Birmingham Sports Holdings has been created in the UK in the last fortnight which looks to be specifically to complete the sale of the stadium. This confirms previous thoughts that the club were looking to make moves to improve its standing for P&S purposes.

Birmingham City Stadium Ltd was incorporated on 20 May, 2019 and lists two directors namely Ren Xuandong and Edward Zheng Gannan. The company can be found on Companies House at this link.

Checks made via the Land Registry site show that there is no transfer of ownership yet.

However, the founding of this company suggests that a move is imminent although I suspect that Blues will need permission from the EFL first.

This move is an interesting one, and for me makes the sale of the ground a little more palatable.

While it is true that the ground and the club are being separated, the fact that they will both be owned by subsidiaries of the holding company suggests it won’t be hard for them to be sold together when the time comes.

I also think that such a move is one that is more likely to be approved by the EFL as it’s transparent in what is happening.

It also means that should Blues end up renting their ground to Coventry City, that income will be booked by BSH at least which is important for them as they need to make money to satisfy the HKSE.

As and when news becomes available I will update this story.

In an unrelated note, shares of the holding company jumped by 20% last night to 0.08HKD. 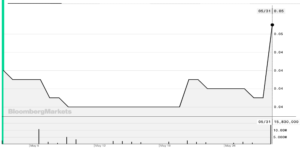 I took a snapshot of the share price graph from Bloomberg to illustrate just how much it has jumped in one day.

However, I don’t think this is necessarily good news.

The volume of shares traded was only 15million, which is less than 0.1% of the total number of shares in BSH.

Such a jump on such a small volume will attract the attention of the Stock Exchange as it indicates that only a small number of shares are in the public’s hands.

Under Stock Market rules, 25% of the shares in the company are supposed to be the minimum that are in the hands of the public – what is known as the float.

Less than that can cause bubbles, where a small trade sends prices skyrocketing because of the lack of supply of shares to trade.

This makes a company ripe for stock manipulation, which is both illegal and also unfortunately rife on the Hong Kong Stock Exchange.

With Paul Suen Cho Hung already facing a Market Misconduct Tribunal in connection to alleged insider dealing at another company I’m sure that this won’t help him.