Birmingham City’s accounts for the year ending June 30, 2019 became available at Companies House on Tuesday. Once again they made for some grim reading, although there have been some improvements in revenues and amount of loss made.

For those of you who want to read the 44-page document in full, you can find all files listed for Birmingham City Football Club plc at this link.

As always, please remember I’m not an accountant – I’m only interpreting from what basic knowledge I have.

I’ve taken what I think are the most pertinent points form the accounts and tried to make them easier to understand.

One of the things the directors of the company have to show is that the company has enough money to trade solvently for the next financial period.

Because BCFC doesn’t have an overdraft with the bank, the holding company Birmingham Sports Holdings has to supply any money that it might need.

As of June 30, 2019, Blues owe BSH £91.4m. The parent company have confirmed that it will not require that money back from Blues in the next 12 months unless the club is able to repay it.

The directors also have to provide cashflow forecasts for the 18 months from the date of the accounts. These show that BCFC will need another £54.2m from BSH over the period July 1, 2019 to Dec 31, 2020.

As the auditors note in their statement, without the money coming from BSH, BCFC would not be a going concern.

What is also of concern is the statement that money has been advanced to the club from BSH without formal documentation and there are no formal terms for repayment.

For those wondering about the impact of the Che Adams transfer, the accounts state that subsequent to June 30, 2019 a net total of £5,559,968 has been raised from player transfers. 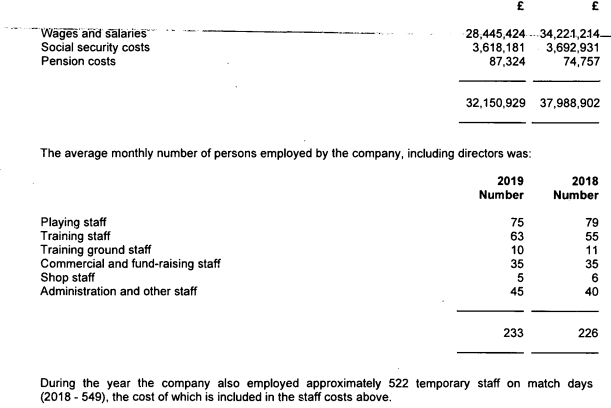 The big question with so much money needed is “where’s the money gone, Tom?”

The answer for a large chunk of it is wages.

BCFC’s staff costs for last season were £32.151m, a fair decrease from the near £38m in the Harry Redknapp / Steve Cotterill season.

However, that still equates to a wage to turnover ratio of 139.74%.

What that means is that for every £1.00 BCFC brought in through the door, they were spending nearly £1.40 on wages – which is by the very definition unsustainable.

The accounts confirm the breakdown of the 233 employees at the club – 75 players (first team, under 23 and under 18 scholars), 63 coaching staff, 10 training ground staff, 35 commercial and fund-raising staff, 5 shop staff and 45 admin and others.

On top of that the club employs around 522 temporary staff – these would be people such as stewards, turnstile operators and match-day catering staff. 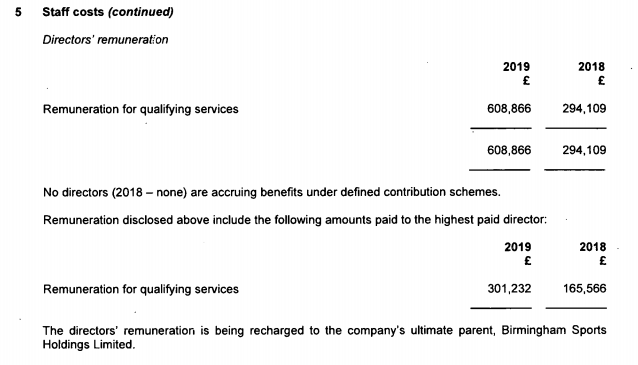 The good news about directors income is that it is recharged to Birmingham Sports Holdings, so BCFC aren’t paying them.

We don’t know for sure who the highest paid director is, but my assumption is that it would be Ren Xuandong based on his position as CEO and the fact that Zhao Wenqing receives a wage as Chairman of BSH.

However much Ren got paid, it wasn’t enough as he was also advanced an interest free loan of £46,649 – to be repaid in one year. As of June 30 he hadn’t paid any of it back.

The accounts confirm the first time that the club have sold St Andrew’s. We don’t know who the ground has been sold to other than another wholly owned subsidiary of BSH.

BCFC banked £22.76m for the ground, which realised a paper profit of £17.189m. Before anyone gets excited, the club won’t have seen a penny of cash – this is a paper exercise shuffling the ownership of the ground from one company to another to ensure BCFC didn’t make another huge loss.

An enquiry on the Land Registry website showed that BCFC are still reported as the legal owners of the ground. This is concerning as Sheffield Wednesday are in trouble currently for misreporting their ground sale and I would hate for Blues to be caught out in the same way.

It’s worth noting that there is a company called Birmingham City Stadium Ltd (12004615) which is owned by BSH and lists as its directors Ren Xuandong and Edward Zheng Gannan. Their accounts for the period May 2019 – June 2019 are due at Companies House by March 31 and it will be interesting to see if they list any major acquisitions.

Having sold the ground, BCFC will now have to pay rent to use it for the next 25 years, at a fee of £1.25m per annum. This actually works out as £250k more than I understand Coventry are paying in rent for using St Andrew’s.

As revealed by the Telegraph on Monday night, BCFC are in trouble with the EFL once again. This time, the club is in trouble for breaching a business plan it had agreed with the EFL in August 2018.

The accounts confirm that the club were notified by the EFL of this breach on May 14, 2019 and are still in negotiations with the EFL about potential disciplinary outcomes.

I wrote about this business plan issue back in February 2019, including how I would have dealt with it.

I’m going to reiterate that the club were not told to sell any players by the EFL, as the EFL are not allowed to do that.

It’s my understanding that the EFL demanded the club produce “fresh income” on their balance sheet to show that they were coming back into line – and that while this income could come from player trading, it could also come from third party sponsorships.

There is evidence that BCFC had agreed to all parts of the EFL business plan in the disciplinary commission document, with the commission reducing the sanction applied to Blues by one point for sticking to this business plan.

Unfortunately, due to the EFL’s insistence on being utterly opaque about disciplinary matters we do not know if the club is under any kind of embargo right now, or when any disciplinary hearing might be.