Lockdown has entered its seventh week in the UK and the football authorities are still no nearer in working out how to complete the 2019/2020 season. As a consequence, football clubs are facing harder and harder decisions regarding how to sort out their finances, with some having to resort to using the government’s furlough scheme.

I meant to write a piece about how Coronavirus is going to affect football weeks ago, but things changed so rapidly it became impossible to write anything that would retain any amount of accuracy over a period of time.

As “the curve” has appeared to flattened now, and with the government stating that the country is past the peak of infections I thought now might be a time to look at how Blues are affected.

While there are a plethora of reports in the media about how the football industry might suffer due to the coronavirus outbreak, I’ve not seen anything that specifically looks at how Blues’ owners might act.

I thought it would be important to look at the finances of Paul Suen Cho Hung and Wang Yaohui (aka Mr King) as these are the people who will in all probability have to cover any shortfall in cashflow to keep things going.

From all that I have heard Suen was having some troubles with his other companies prior to the outbreak happening, and things have not improved for the better that I can see.

At around the same time Suen completed his takeover of Birmingham Sports Holdings, he took over another company listed on the main board of the Hong Kong Stock Exchange.

Suen owns a 16.45% stake in EPI Holdings (00689.HK), making him the second largest shareholder in that company. 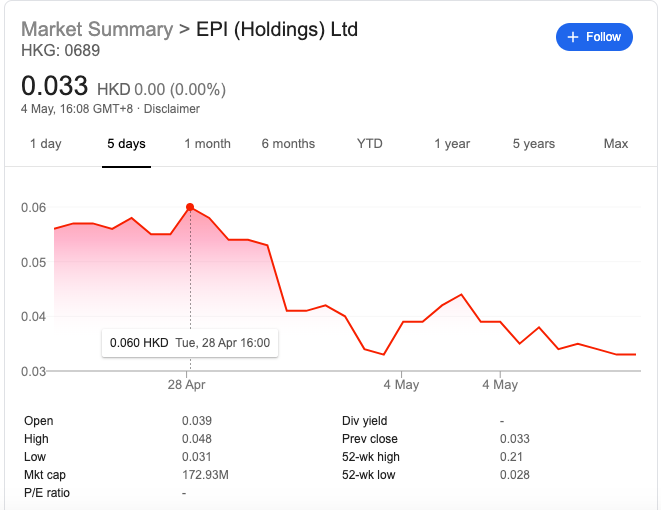 EPI have two arms to their business, with just under half their revenue coming from an oil exploratory company in Argentina.

The lockdown has caused oil prices to plummet due to lack of demand, with the knock-on effect that oil companies are finding it harder to sell oil.

EPI confirmed in a voluntary announcement to the Stock Exchange on April 8 that they had been informed that their customer in Argentina has temporarily called a halt to purchasing crude oil from them.

Suen has had to keep a lower profile in his share dealing since proceedings were commenced by the Securities and Finances Commission (SFC) in December 2018 regarding allegations of late disclosure of inside information.

It’s much harder to track what is happening to Wang during this crisis, due to Wang’s preponderance for using nominees to run his businesses in his name.

However, there are things we can look at.

UWHD filed accounts on April 8 with Companies House that gives us a little insight into what they are doing.

We can see from those accounts that UWHD has borrowed £38,151,145 from its shareholder.

Officially, the company is owned by Asia Engineering Group of Apia, Samoa which in turn is controlled by a man named Gu Zhongfei. However, previous research connects both Gu and AEG to Wang and I believe Gu is acting as a nominee.

According to the UWHD accounts, that money has been used to invest in a former landfill site for development which is valued by the company at £36.19M.

Using filings from the Land Registry, I’ve been able to confirm that Wang is currently in the process of selling his home in London. The estate agents have not confirmed a price publicly, but a similar house nearby is also on the market at around £28.5million.

It’s my belief that Wang is selling that house as he has brought other property in the capital to live in.

It’s been obvious for some time that Wang has been the man putting money into BSH and as it stands, Wang clearly has some money available to him despite the coronavirus crisis.

What I guess it will come down to is if Wang has the desire to keep propping the club up – especially as it looks like Suen is hitting more and more issues in his financial life.

Either way, it’s going to be interesting how the financial landscape looks in the next few months.