It’s that time of the season yet again for Blues – last day relegation drama following months of crap results. This time things have gone a bit too far for many and talk of protest is lighting up groups on Facebook. The big question of course is if it is all talk or if it will spill over into actual action – and if it does, how much effect will it have.

Protest seems to be a dirty word among some Blues fans. It’s often seen to be something that they would do over on the other side of the Expressway rather than ourselves.

Yet with the club in mounting debt to its Hong Kong parent, no longer owner of its own stadium and soon to lose the best youth player the club has developed since Trevor Francis, it really does seem like this might be the time to ask for better.

The trouble is, protest is hard. It requires effort – and even more importantly, it involves sticking ones neck out on the line. It’s not hard to find examples of where people have been shot down online for daring to suggest that it might be time to make things uncomfortable for the owners.

It’s one reason why protest often remains a thought, vitriol spilled out in social media posts and petitions to no one.

It doesn’t have to be that way.

So someone has been busy down Wast Hills this am #bcfc

(Pics not taken by me) pic.twitter.com/y7FwF6g2B1

On Saturday morning, I received some photos from a friend of mine who is in the building trade. Having had enough of the crap served up by Blues, he’d picked up some plywood, some paint and some really heavy chain, and knocked up some signs which he took with him to the training ground at Wast Hills. Once there he chained the signs proclaiming “Ren Out” to the entrance sign, and the bus stops either side of the road adjacent to the entrance.

No discussion beforehand. No talk on social media, no crowdfunding. He just thought of what he could do, and did it.

In some ways they’re right. A piece of ply isn’t going to make Ren Xuandong think “oh dearie me, time to go”.

However, what it’s going to do is add to the pressure that is on him right now. If you can imagine that the board of directors are all happy to stab each other in the back to get in front, how many of them do you think might have WhatsApped a picture to Suen (or even King) to say – “check it out, Ren losing even more face”?

Not only that, but the pics online were shared far and wide. It got people sitting up and talking about protest. It might have even inspired others to do similar things. 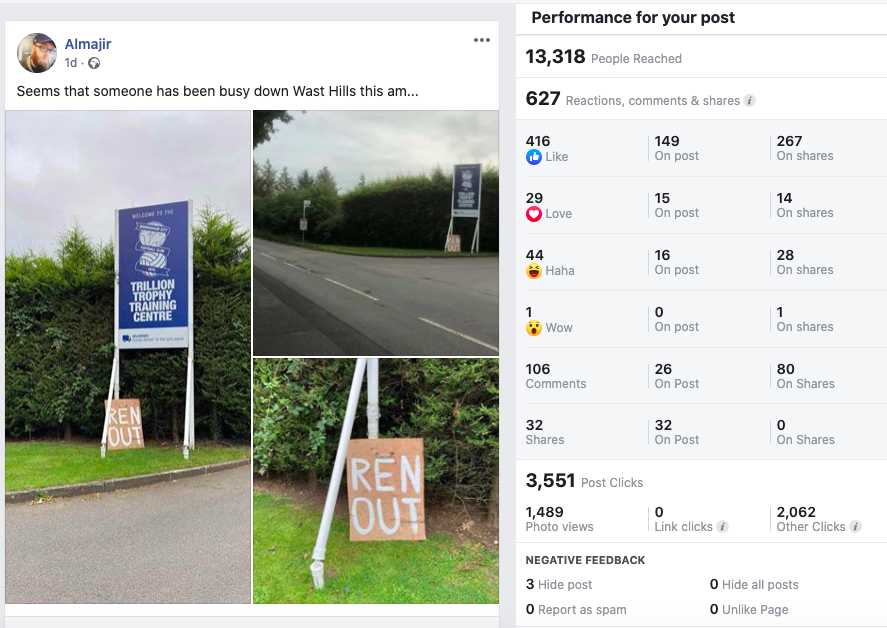 When former director Panos Pavlakis trolled Ren over it, the Birmingham Mail got involved. That story got picked up by other outlets.

All of a sudden, that little piece of ply is all over the internet.

It might not be what causes change, but I think it’s a catalyst. People look at huge movements and think that they need to organise something big to create change but that’s not true.

Every small thing that people do is like a snowball. Enough of those snowballs come down the hill, you’ve got an avalanche – and with that avalanche it’s just possible something positive might happen.

But to get that avalanche, people need to be brave enough to start making their own snowball.