The football season may have come to a close, but takeover season appears to have well and truly started. News broke on Saturday morning of an offer for the club brokered by Keith Harris, with journalist Neil Moxley claiming that the deal was close and could be done by the end of the month.

While there was some initial confusion from some fans as Paul Richardson and Maxi Lopez had been sighted in the directors box at St Andrew’s, it was confirmed by Moxley after the match that the offer he was referencing was from a different consortium.

Moxley, who reported in his short piece for the Birmingham Mail that Harris had been advising the owners on the sale, told Radio WM that:

“…the deal to take over at Birmingham City is to all intents and purposes pretty much done”.

Moxley went on to confirm that while he didn’t know the identity of the buyers, he was led to believe that they had significant funds that will be used to rectify things off and on the pitch.

News of an offer brokered by Keith Harris took people a bit by surprise and had some of Craig Gardner’s acolytes demanding apologies for any of the bad stuff people said about the Technical Director.

Harris has apparently been appointed to sell the club by Birmingham Sports Holdings Chairman and BCFC director Zhao Wenqing, and along with Gardner has been doing what he can to make the sale happen.

Despite Moxley not mentioning Harris as his source in his piece, I’m fairly sure that the two people who he met to discuss the bid were Keith Harris and David Bick. Harris and Bick were then guests of Gardner at St Andrew’s for the Blackburn game.

I’ve listened to the Moxley interview on Radio WM a few times, and I have to admit my surprise that Moxley has nailed his colours to the mast so strongly about this offer.

My problem doesn’t lie with the current anonymity of anyone involved with the bid, but lack of acknowledgement regarding the complexity of buying the football club.

The Hong Kong Stock Exchange is the big elephant in the room in all of this and Moxley didn’t mention anything about them in his interview, only stating that he thinks the deal could be done in a couple of weeks.

While I’m sure it’s possible for a sale and purchase agreement could easily be drawn up in that time, there are protocol issues with the HKSE that can’t be done quickly.

I have contacted Moxley to ask him about agreement with the HKSE and this consortium, but I have yet to receive a response.

However, I will admit that I cannot believe an experienced financier such as Keith Harris would be ignorant of the stock exchange situation and as such, I would hope that any deal brokered by Harris would be one that would resolve all regulatory responsibilities in a timely and expedited manner.

The problem is that now the cat is out of the bag about this offer, the levels of hype out there have gone insane.

There are masses of speculation about who this mysterious bidder could be, with the attendant dreams of the amount of money they would be prepared to pour into the club.

I hate being the realist who has to rain on people’s parades, but the sad fact is until there is an announcement made to the HKSE that a deal has been agreed, it’s not done.

The best analogy I can offer is that it’s like a football transfer; we see all the hype in the newspaper, we sit glued to transfer deadline speculation but until a player is holding a scarf on the Kop it’s not a done deal that they’ve signed for Blues; indeed in the case of Hossam Ghaly it wasn’t even done then as we sent him back after he argued with Steve Bruce at Wast Hills.

Therefore, I hope people can contain their excitement, and rather than watching social media for updates keep an eye on the HKSE.

You can access the latest news page at this link – the stock number for Birmingham Sports Holdings is 02309 – and announcements happen until 11pm HKT, which is 4pm BST.

Please bear in mind however that Monday May 9 is a public holiday in Hong Kong and thus there probably won’t be an announcement on that day.

Part of me feels a bit sorry for Paul Richardson and Maxi Lopez.

Saturday was meant to be their day for attention as they rocked up at St Andrew’s, and then their bubble was burst by news of another interested party. 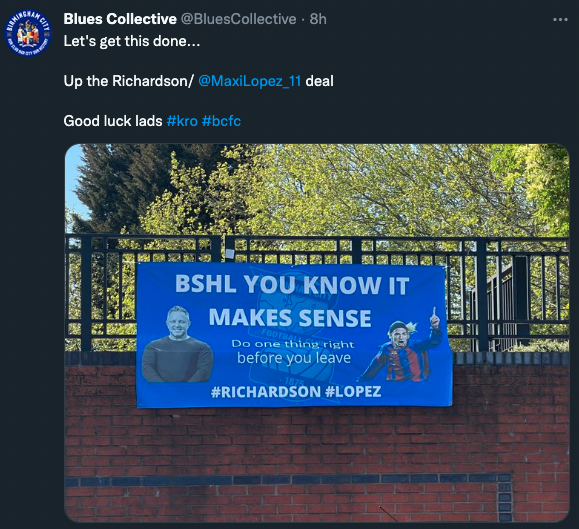 Richardson has clearly put some hard yards in too, with both Blues Collective and Blues Trust coming out publicly in support of the former Gymshark director’s group.

The problem Richardson has is that it’s not us he needs to convince – it’s the owners.

As I understand it, Richardson’s group believes that they are negotiating directly with the owners rather than going through Harris.

I’m not entirely sure which of the owners they are negotiating with, but I would suspect that Sammy Yu’s role in this endeavour is to act as the go-between.

From speaking to people who have spoken to Richardson, it’s my understanding that the money used to fund the purchase would be in part borrowed, which leads me to believe that Richardson is doomed to failure.

I can understand his two-tranche approach to try to get past the complexity of buying the club and the stadium, but I’m convinced it would be doomed to failure.

A good recent example of this kind of approach was the attempted takeover by East Street Investments of Charlton, which was fronted by Matt Southall. That ended in ignominy for both ESI and Southall, with both ending up in court fighting each other.

While Southall apparently isn’t part of this bid, there have been previous links both to this bid and to a previous bid for the club in 2015 by a consortium including Paul Richardson. I sincerely hope Richardson isn’t being advised by Southall anymore.

The one question that I have yet to see an answer to is if BSH are actually interested in selling the club.

While I can accept that Zhao has instructed Keith Harris to help broker the deal, I must admit there is a part of me that is wondering if Zhao has been told by the owners to do so or if he is acting off his own initiative.

I’ve seen too many people linked with BSH in the past claim to have the authority to sell the club when they absolutely didn’t for me to believe a sale could be happening without hard evidence in front of me.

As I’ve said before, the sole evidence that will convince me is the announcement from BSH to the stock exchange to confirm to shareholders that an agreement has been made and that the process to send out a circular and call an extraordinary general meeting is underway.

However, I’m not one to meekly wait and see what BSH will do.

In my capacity as a shareholder of BSH, I have emailed the company secretary Robert Yam Pui Hung to ask him if in the light of all the newspaper and radio reports about the potential sale of BCFC, if BSH could make an announcement to the HKSE to confirm to shareholders what is happening.

BSH have a statutory obligation to ensure that shareholders are told first of anything that might affect the price of BSH shares – something that the sale of the company’s chief asset would absolutely do.

I’m hopeful that by doing this, I can force BSH to confirm if something is in the works, which will help reassure the naysayers like me