Birmingham Sports Holdings held their annual general meeting on Friday 30 December at the United Centre in Admiralty, Hong Kong. As a shareholder in the company, I flew to Hong Kong to attend the meeting to ask questions about whether BSH were looking to sell their 75% stake in Birmingham City plc. 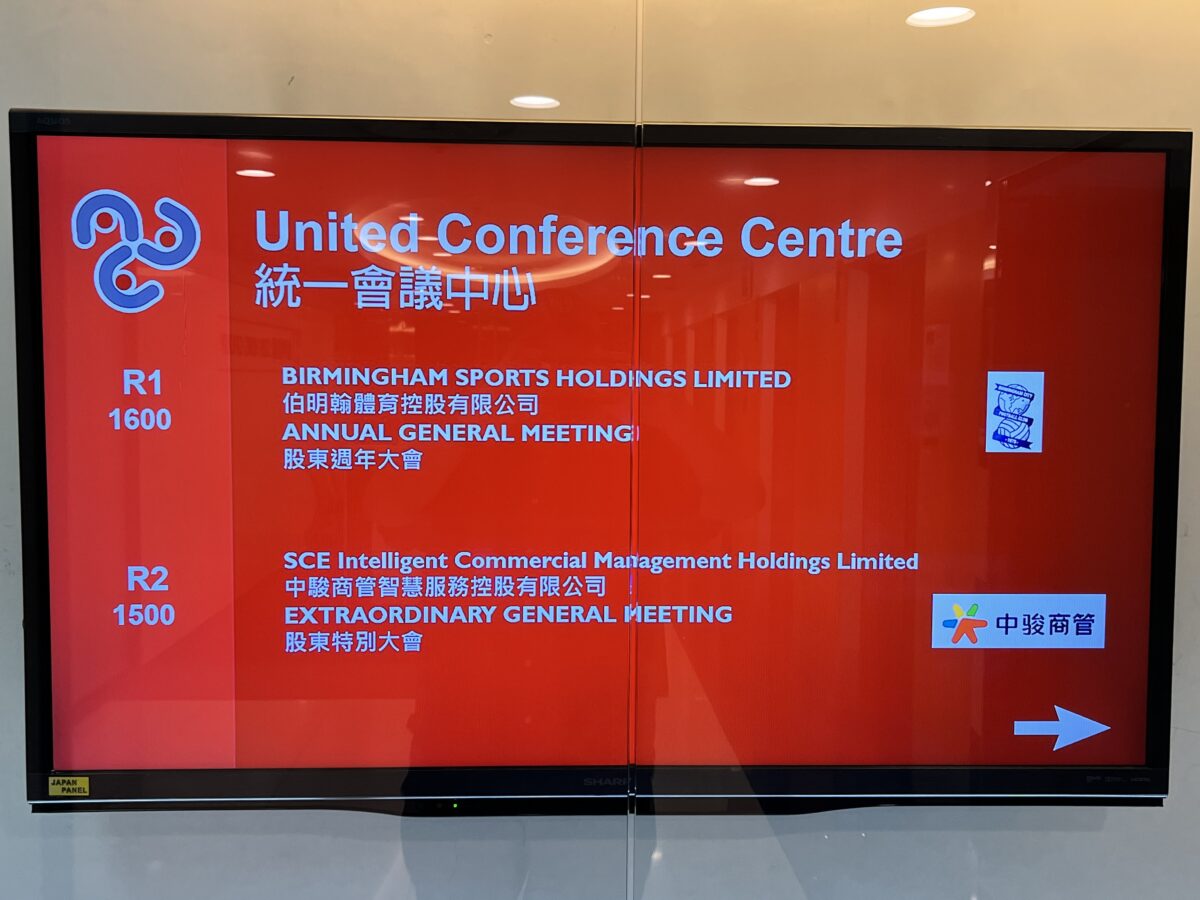 It’s safe to say it’s been a crazy week for me to get out to the Far East; my trip has so far included an emergency landing at Zurich attended by a fleet of fire trucks and my baggage going on a short tour of Brazil before being reunited with me in Hong Kong.

However, it’s been interesting not only to attend the meeting but to speak to people on the ground here to get a better understanding of what is going on.

One thing I’ve noticed both in Birmingham and in Hong Kong is that it is very abstract to think about what is happening in the other place. The huge physical distance between the two means that most people in Birmingham have never visited Hong Kong, and most people here haven’t been to Birmingham.

It’s my opinion that because of this, it’s hard for fans in Birmingham to understand why there seems to be so little care from either BSHL or the authorities with respect to the club. 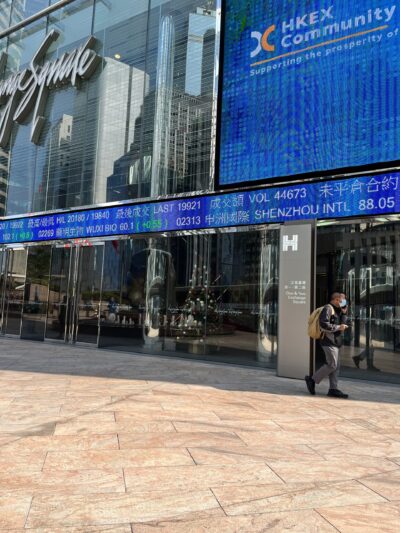 On my way to the meeting yesterday, I went past the Hong Kong Stock Exchange offices in Exchange Square. As all trading is electronic now there is no trading floor and as such there isn’t really much to the HKSE that one can see from the outside.

However, as you’d expect there is an electronic ticker outside the front door with updated prices of stocks on the main board of the stock exchange here.
Always on the hunt for a picture for the blog and with a few minutes to spare, I patiently waited for 02309 to come up, which is the number for BSH.

As you can see from the pic above, BSH weren’t on the ticker – which when I think about it isn’t that surprising but should be evidence to one of the first things to bear in mind out here; BSH aren’t a big deal.

I sometimes see fans online openly wondering why the HKSE allow the company to continue to post huge losses year on year; why nothing is done to question what the hell BSH are doing.

Sadly, the answer is that BSH are such small potatoes that no one really cares what they do. As long as the company doesn’t do something hugely illegal (like posting inside information as a comment on some blog) the authorities here are going to allow them to carry on regardless.

When Carson Yeung was arrested and tried for money laundering, it was a huge story because of the crime committed; Blues were just a sideshow.

Therefore, it stands to reason unless something else equally huge goes down, no one here is going to care. There were no members of the press at the AGM and I have struggled to make contact with them here as there is much more important stuff going on to be concerned with the woes of a crappy Championship football club.

Even the AGM was proof that no one cares.

The capacity of the room for the AGM was maybe 30 people; there were only eight shareholder attendees there.

Of those eight attendees, two were almost certainly employees whose job was to propose and second each motion on the agenda; one was a translator who BSH graciously provided the services of for me, and another was HK-based Blues fan Jeff Au.

Two of the other three were what is known in the local parlance as “Uncles”.

For those not familiar with the terms, “Uncles” and “Aunties” are affectionate and respectful nicknames given to the older populace here.

The two “Uncles” in attendance at the AGM were there to ask if shareholder attendees got a supermarket voucher or meal ticket for turning up, and both left when the answer was in the negative.

I’ve since been told this is not an unusual phenomenon; many other events including university functions will have uncles visiting to see if they can get something for turning up.

I’m reasonably sure had I not been in Hong Kong, that would have been the limit of the Q&A session at the end of the meeting.

Thankfully, I was able to ask two questions of the board.

Contrary to my belief before visiting Hong Kong, the meeting was conducted in Chinese.

This could have made life very difficult as my Chinese is mainly limited to asking for a couple of beers or directions to the bathroom. Thankfully, not only was a translator provided for me, but I was allowed to ask my questions in English and receive an answer in the same language.

I think the fact this happened was in part a PR exercise conducted by the people at BSH.

As I had to register my attendance in the weeks prior to the meeting, it was well known by BSH that I would be in Hong Kong. I was actually told by staff before the meeting began that I was considered their “VIP”.

While this absolutely guaranteed a more anodyne response to my questions, I think it ensured that I would have the opportunity to ask them.

The first question I asked was simple:

“Could BSH confirm to shareholders that they had no plans to sell their 75% stake in Birmingham City PLC.”

I phrased the question this way as I thought it was important I asked it from a shareholder point of view rather than as a fan. 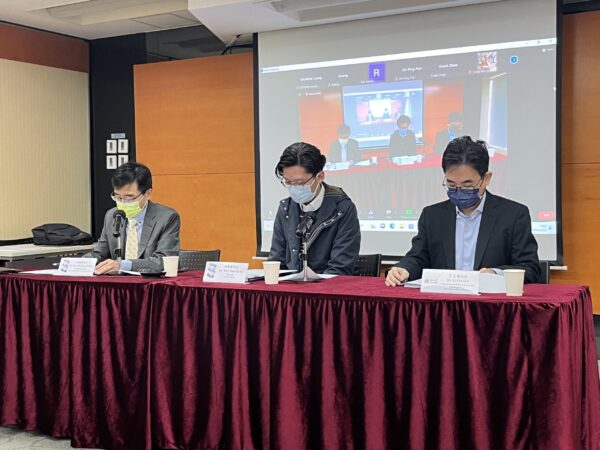 The answer to my question was given by company secretary Robert Yam Pui Hung, who said as part of his answer that:

“The club is one of the most important businesses in the listed company so any adjustment to the business model, or change in shareholding can only be made after careful review of the overall business as a whole. and we are confident that at the moment there is no reason to sell the football club.”

Yam was also careful to note that there was no guarantee that BSH would not sell in the future should there be changes to their overall business model of the company.

While this answer is careful almost to the extreme, I think we have to take it at face value that they BSH are not actively looking to sell their stake in the club right now.

I get that people will find this confusing as Maxco claimed they had a deal, but the only bit that has been publicly confirmed of what had been agreed was for a stake in the club that is not owned by BSH.

The impression I get from all this is that right now, BSH feel comfortable enough financially to put the ball very much in a buyer’s court to make an offer for the club; something that almost certainly means any buyer making an offer at this moment in time will have to accede to the horrific staged deal agreed by both Bassini and Maxco.

Again, while this is a non-answer, I don’t think BSH are incorrect. I do think that the EFL have the responsibility to check disclosures made for Owners and Directors Test purposes with the relevant people as much as with the company as a whole.

Within ten minutes the meeting was done.

Some may think I have travelled an awfully long way to get two non-answers, but the truth is that the official part of the meeting is only a bit of the story.

One of the biggest reasons for me to come out to Hong Kong was to talk to people face to face, even if it was off the record.

Too much reporting is done in the UK without understanding of how things work out here and the only way I can see to correcting that is to talk to relevant people out here and to pass on the benefit of that knowledge.

As most of those conversations I have had are off the record, I can’t talk about exactly who I have spoken to or even what I have talked about.

However, what I can do is share with you how it’s altered my perception of the situation around the ownership of the club, and what it means going forwards.

As I have opined previously in this piece, I think there is a massive gap in the understanding of each side of the BSH / BCFC divide, and I have an idea it might be similar within the company itself.

The impression I get on this side of the world is that there may be people working for BSH in Hong Kong who are not fully aware of the situation in Birmingham.

Whether it’s by deliberate obfuscation or just broken communication I’m not sure, but it does feel like there are things that have happened in Birmingham that people here connected to BSH in Hong Kong are not fully aware of.

I’m now massively curious as to just who Maxco think they signed a deal with for the main 75% stake in the club because it doesn’t feel like it was someone here.

Likewise, I don’t think people here are aware that there may now be legal issues as Maxco look to reclaim the money they pumped into the club to keep it running while they were attempting to complete their takeover.

This all leaves the club in limbo, as the impression I get from here is that it’s very much business as usual and I think means we can take at face value the declaration that they do not want to sell.

The lack of interest or knowledge of the football side of things also makes me think that the reasons to not sell the club are not based on how Blues are doing in the table or what transfer fees the club may receive.

I’ve seen some calls for protest among other things but I genuinely don’t know what it would do except for allow people to vent their anger.

I’m at a loss what to suggest otherwise; part of me thinks that the thing to do might be nothing at all as it surely is only a matter of time before finances worsen enough that the position of BSH has to change.

The only thing I can offer is that I will continue to build on the contacts I have made and developed, and do what I can to continue to bring new information to fans.