The summer has seen changes for both Birmingham City and Birmingham International Holdings. The latter went through a name change, becoming Birmingham Sports Holdings as the new regime look to move on from times of old.

There have been changes at director level with Panos Pavlakis the most notable of directors to be leaving St Andrew’s. There have also been new appointments both at holding company and club level, including a gentleman by the name of Ren Xuandong.

Who is Ren Xuandong? 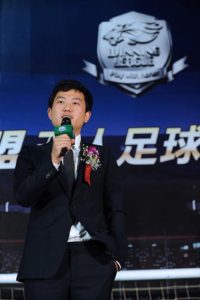 The newest director of Birmingham City Football Club is Ren Xuandong. There has been no announcement regarding the appointment of Mr Ren – all I can say with any certainty is that the board management page has been changed between 14th June and 19th June to include Mr Ren’s name.

There has been no notification on the Companies House website but I would expect something to be announced in the next week or two. I understand the FL have also been notified – as like all directors Ren will have to take the Owners and Directors test (OADT).

Ren has been listed as the CEO of Winningleague LLP, or to give them their Chinese name “北京百轩胜利联盟体育发展有限公司”. Winningleague set up the Luis Figo Academies in China, and bought China League One Club Nei Mongol Zhongyou FC in 2015. The club was renamed “内蒙古中优胜利联盟足球俱乐部” or Inner Mongol Zhongyou Winning League Football Club. They’ve not been winning leagues though, and they currently stand in the relegation positions in China League One. 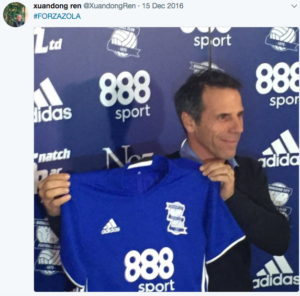 Ren has a twitter account – although he is not active – at @XuandongRen. It’s interesting that he tweeted pics of both Zola and Redknapp when appointed which helps to show that he has been the éminence grise behind the BCFC throne for some time.

So what’s the big deal?

Since April there has been a lot of buzz around the corridors at St Andrew’s about a man only known as Mr. Dong. He was important – edicts were sent around to make sure the offices were tidy prior to his visit and the gossip was Mr. Dong represented someone big in China.

My understanding is that it was Mr Dong who was the person to make the call on Harry Redknapp, and Mr Dong who was present in the boardroom at Bristol City along with BSH Chairman Zhao Wenqing to watch the club retain its place in the Championship.

Today has been the first confirmation that Mr Dong is in fact Ren Xuandong and who this mysterious figure actually is.

I’m going to openly admit this is my speculation from hereon in.

I’ve long believed that TTA would sell Birmingham City on once the two years elapsed, and I’ve also long held the belief that the transition would echo the one between Ernst and Young and TTA – something that happened over a period of time with the new guys being involved before the old ones went.

This guy being involved would confirm that belief. I’ve never believed Paul Suen Cho-hung has been in it for the club – he has so many other businesses going at the same time it’s clear he’s the go-to guy for making money with distressed companies on the stock market. However, a new face with a footballing background connected to China makes me think these are the guys who will be in power once TTA complete their task.

I’ve already had people on Twitter ask me if this good news or bad news – and it’s too soon to say either way. As a cautious person though (particularly post Carson) I would like to know if this guy is the guy who will take charge or if he’s working for someone else. I’m also intrigued bearing in mind his background in Academies if this is what he sees the club’s long term future as.

Is it even possible this guy will take over Panos’ role as figurehead of the club?

As always, time will tell.

One thought on “BCFC: The Birmingham Power Shift”