Previously on almajir.net, I have written about Wang Yaohui aka “Mr King” and his connections with various shareholders in Birmingham Sports Holdings along with the company chairman Zhao Wenqing.

King is directly connected to Birmingham Sports Holdings via the company’s fourth largest shareholder, Chigwell Holdings. A document linked previously on this site shows that Chigwell borrowed US$40million naming Wang Yaohui as the borrower. I wrote about that document and link in this article, and this article about how that money was used in part to fund Birmingham City FC.

Today I wanted to look at Wang’s connections with the art world to further understand his character.

According to this report in  Time Out Shanghai, in 2011 Wang Yaohui bought an exquisite Qing dynasty porcelain vase for £51.6 million (483.6 million RMB) after it was discovered during a routine house clearance in London. 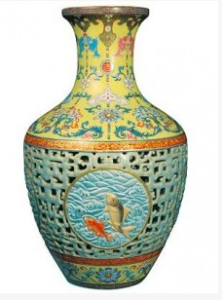 The elaborate vase, purportedly made for emperor Qianlong, was sold for more than 50 times the presale estimate and broke the record for an Asian work of art offered at auction.

However, the report goes on to state that confusion reigned when the auction house failed to receive payment for the vase. After two years, the vase was re-sold to another Chinese purchaser in a private deal believed to be at a price of around £25million – less than half what Wang had bid.

I found this story intriguing but lacking in detail – and I decided to find out what else I could to understand why Wang would offer to pay 50 times what something was valued at – let alone not handing over the cash once the bid was accepted.

To do that, we need to look into a company called “北京雅盈堂文化发展有限公司” – “Beijing YangYing Tang Culture Development Co Ltd” in English.

YangYing Tang are a company that deals in art trusts. Their modus operandi is to buy valuable artworks and then use that artwork as collateral to borrow more money to buy more artwork, and so on and so forth.

Wang Yaohui is named in this piece by Sina (Chinese) as the “de facto controller” of YangYing Tang. The piece goes on to talk about Wang having a reputation for making huge bids for artwork and then not following through with payment.

The piece pulls no punches; it confirms that a survey of people in the industry believed that these art trusts were “a scam” and that money was being misappropriated.

This long post on Linkedin (in Chinese) by entrepreneur Peng Yiqui  (彭易秋) went further, stating that these art funds were in effect laundering money.

This piece on Kaixin.com (Chinese) reports that by the end of 2011, YangYing Tang owed a large amount of money to various auction houses – in the realm of hundreds of millions of RMB – and that Wang hadn’t even seen the artwork bought. It goes on to report that some artwork listed as being bought by the company wasn’t even auctioned at the reported auction houses.

360doc.com reports (Chinese) that Wang spent between 2Billion and 4Billion RMB on artwork while in charge of YangYang Tang.

While Sina.com (Chinese) reported in 2016 Wang Yaohui was investigated for his art dealings, nothing further has been reported.

Before anyone gets het up or litigious, I want to make it clear that I am not saying Wang Yaohui is using Birmingham City to launder money.

I will repeat that while Wang Yaohui’s name is on the loan documentation to Chigwell Holdings and Chigwell holdings subsequently loaned money to Birmingham Sports Holdings for use by BCFC, disclosures of interest made to the stock exchange of Hong Kong do not name Wang Yaohui as a shareholder in Chigwell Holdings or its controlling companies.

However, what I would like is for the directors of Birmingham Sports Holdings – and Zhao Wenqing in particular bearing in mind his obvious connections to Wang – to make clear any connection they have to Wang, and to offer some sort of reassurance that Birmingham City fans will not have to worry about where the money to run the club has come from as they have in the past.

One thought on “BSH: The Elusive Mr King – Part 4”