A header from Lukas Jutkiewicz along with a massively deflected effort from teenager wunderkind Jude Bellingham gave Birmingham City a 2-1 win over Stoke City at St Andrew’s on Saturday.

The victory on Saturday leaves Blues ninth on ten points with only goal difference separating them and the playoff positions as we head into the first international break.

From a results point of view, Pep Clotet is doing just fine.

In eight previous Championship campaigns, Blues have only managed to pick up more points from their first six games twice.

However, it’s not hard to find people online who are unhappy with the way Blues are playing and who already want change.

Successive 3-0 away Championship defeats to Swansea and Nottingham Forest have shown how much Blues struggle to attack away from home while the wins against Barnsley and Stoke have come with long periods of staid and stodgy play.

If Blues can continue picking up the wins then everything should be fine but is the pressure on the manager beginning to tell?

Pep Clotet is in a tough position.

His title of “Caretaker Head Coach” gives off an aura of impermanence.

I understand from various sources this impermanence is backed up by a very short leash in terms of the backing from the board.

Clotet has confirmed in his own words to the local press that he has very little say in who comes in and goes out from Blues.

He’s been allowed one coach of his own choice – Paco Herrera – and has had to work with a coaching staff who were his co-workers under Garry Monk.

That has led to friction which has seen one coach at least – James Beattie – left off the bench at various games.

Yet despite all of this pressure, Clotet has been told by the board that the playoffs are the absolute minimum achievement that the board will accept this season.

My understanding is that desire means that Clotet’s performance is being very closely monitored with any sustained dip in results for Blues equalling him receiving his P45.

With all this going on in the background, it’s pretty easy to understand why there is nervousness in the way Blues play.

Back at the end of July I wrote about how Clotet deserved some patience as he tried to put together a team and a style.

I’ll be honest here and admit that I wrote that article partly because I knew back then of how much pressure that Clotet was under from above.

While a prolonged dip in results can harm the chances of a club looking for promotion, I think it’s also true that the league season is a marathon not a sprint.

We’ve already seen in the past few seasons how continuously changing managers can negatively affect the team – it’s important that the board do not make the same mistakes again.

However, it’s not just Pep Clotet who is under pressure.

This season the onus is also on club CEO Ren Xuandong to get Blues into a position where promotion is possible.

After dispatching Garry Monk from the manager’s job, it’s been easier for Ren to assume a position of control.

While the tactics boards in his office are probably only used for his latest game of Football Manager, I still think it’s obvious that Ren is trying vicariously live out his dream of being a proper football manager this season.

However, taking more control means that Ren is also in a position where he can held more accountable by his bosses for Blues’ performance and results. 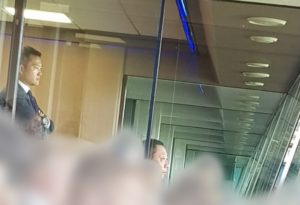 Unlike his predecessors Peter Pannu and Panos Pavlakis who reported back to Hong Kong what was happening, Ren very much has his bosses looking over his shoulder.

I’ve long established on this website that the money coming into the club is not coming from Paul Suen but from Chinese businessman Wang Yaohui (Mr King).

I think that there is a misconception among some that Mr King is distant and reliant on reports to see what is happening.

The truth is actually very different.

Not only does Mr King live in a property in London, but he sometimes takes in games at St Andrew’s to see what his money is doing.

While the results have been okay, the performances have hardly matched up to the demanded “attacking style of football”.

Sources close to this website have confirmed that Mr King has professed his irritation at the way Blues have played both to Ren and also to Edward Zheng Gannan.

Needless to say, I don’t think it’s just Clotet’s neck on the line.

I think should Blues not live up to the promotion push demanded by Mr King then life might get very difficult for both Ren and Zheng.

People might think that I would be happy that there is a possibility that Ren could be removed but the truth is I’m actually unsure if it would be a good thing or not.

If Ren should go, then the question would be who would replace him.

Knowing what I know of Mr King and the way he works, I think any replacement would have to be someone who enjoys his trust implicitly – which could mean another face brought in without any knowledge of how to run a football club.

Likewise, should Mr King get bored of continual failure (in his eyes at least) and decide that the flow of money has to stop then Blues could face a very uncertain future.

That all adds up to a lot of pressure on the backs of Pep Clotet and the players.

It could be that success on the pitch is important from a long term perspective as a short term one.

One thought on “BCFC: Under Pressure”