Football as we know it has come to a standstill. All league football in England has been suspended until April 4 due to the current outbreak of coronavirus (COVID-19). The disruption to society is unprecedented in modern times – what does it mean for Birmingham City?

If you thought Saturdays without football were boring, you should try them in self-isolation. The one perk (or not, depending on how you feel) is that it’s given me some time to sit and think about what the heck might happen for Blues in the coming weeks.

As there is so much to go through I’ve divided it up into three articles, which I’m going to publish over the next few days.

I know that the situation could change quickly. If that happens, I will edit this article. It was last edited 08:00 16 March, 2020.

The first one of these looks at playing logistics.

The first thing to think about is the effects that the suspension of playing will have on the season.

As it stands, Blues have three games to make up – the away game to WBA and the home games against Hull City and Huddersfield.

If the season was to restart on April 4, then looking at the calendar theoretically the regular Championship season could only need to be extended by one week after May 2, with midweek games on the 21/22 April and 28/29 April.

This is made trickier for Blues due to their groundshare with Coventry City, who have four games to make up including two at home.

However, assuming that it would be possible this would enable the playoffs to start on time on May 16.

The Championship is lucky in that all teams have completed the same number of games – 37 – and no Championship team is left in cup competition either ensuring no clashes with fixtures there.

It’s not certain that games will restart on April 4, however.

Brighton and Hove Albion’s chief executive Paul Barber has already said that he thinks that it is unlikely that competition will restart on April 4.

With various teams having players in self-isolation, Barber thinks that it could be very difficult for players to complete the 14 days necessary in quarantine and then get back to match fitness in time for April 4.

It could be that the situation is much graver than that.

England’s chief medical officer Professsor Chris Whitty has said that he thinks the peak of the UK outbreak might not be for another 10 – 14 weeks – which takes us into late May or even early June.

If that is indeed the case, then it’s possible that disruption could get worse rather than better, which then takes us into uncharted territory.

To ensure domestic leagues are to be completed, it could mean that Euro2020 would in all probability have to be suspended for a year – or even that the 2020/21 domestic season has an altered timetable to bring it back into sync in the normal football calendar.

For those who would like to see it played now, I saw this idea on Reddit for “The PremierSHIP” which I quite admire. 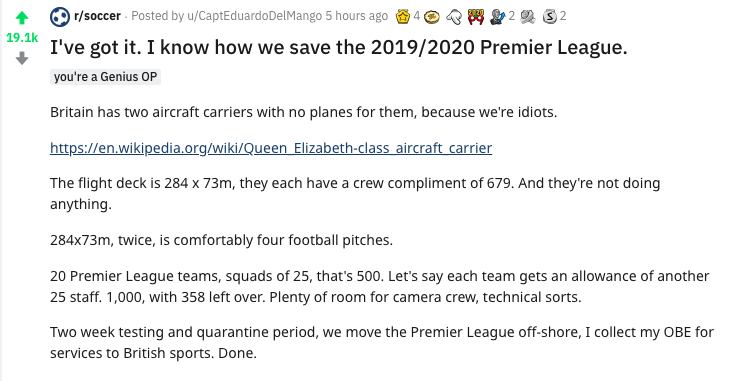 A flight of fancy yes – but it might be that we need some real outside of the box thinking to work this out.

Any delay in completing the season is going to cause issue with how player contracts operate.

As per EFL regulations, football player contracts run from July 1 – June 30. This means that every player who is out of contract on June 30, 2020 could be out of contract before the end of the season.

Of those nine players, luckily only three are in first team contention, and of them Kerim Mrabti has a one year option in the club’s favour.

There is an argument that this contract situation wouldn’t affect Blues too badly – and in the case of the “bomb squad” even help the club out.

However, there is also the question of the transfer window. This normally starts the day after the normal season finishes.

If the Championship season finishes after July 1, then it’s going to clash with the international window. The EFL will have to make a decision on how they’re going to change the window so that clubs can finish the season without having their best players poached.

Then there is the loan question. Standard loans finish on May 31.

There would need to be some sort of agreement that would allow to Blues to keep their loanees for longer; after all, the team would be somewhat crippled if it lost Clarke-Salter and Hogan before the end of the campaign.

The suspension of the football season even affects free agents.

Youssouf Mulumbu is currently in training with Birmingham City, but under current rules must be signed by the club by March 26 if he is to be a part of the first team squad this season.

The question would be if the club would sign a player without knowing how long it is until the season is restarted.

There is a positive in all of this.

The suspension of the season means that there is a longer period of time for players to recover from injury without missing games.

This is good news for Blues, who are currently missing a lot of width due to injuries to Jeremie Bela and Jacques Maghoma.

Instead of having to think about how to play a few games with less options, Blues now should be able to call on those two players for the remainder of the season when it’s played.

Even long term absentees like Josh McEachran will benefit. Although McEachran is out for an extended period of time, the amount of football he will miss will drop as the suspension goes on.

Of course, this is the same for all teams – but assuming that teams are given a little bit of chance to get their players back to match fitness before the season restarts it could be a good thing for those players sitting on the sidelines.

In the next article in this series, I’m going to look at the financial implications of the break for Blues.

In the mean time – stay safe, look after those who are vulnerable and wash your hands!