Saturday’s game against Luton Town isn’t a quite literal must win for Blues but from a figurative point of view failing to beat the Hatters will easily crank up the pressure on Aitor Karanka. The Spaniard continues to be bullish in press conferences before games but from a fan’s perspective it’s getting harder to believe that things are fine.

“I think that everybody realises that we’re not in a good position in the table but we are good on the pitch, and if we are able to fix those small details, for sure we are going to win games because again, we’ve been much better than our opponents in the last four or five games.”

The mood from the pre-match press conference from Karanka on Thursday was one of confidence that results are going to better.

If Blues are going to avoid relegation, then there is no doubt that they are going to have to improve. Since beating Reading 2-1 on December 9, Blues have won just one league game and taken a miserly six points from 11 games.

That win came against Boro on January 16, and ensured Blues remained in 18th place seven points ahead of teams in the bottom three.

While it is true that there have been some better performances of late from some players, a mish mash of individual mistakes and refusal to change the team until something bad happens has seen Blues continue to struggle to pick up points.

Against Wycombe Wanderers it felt like Blues had the Chairboys on the ropes. Rather than tag in one of his forwards to deliver a knockout blow, Karanka sat on his hands until Marc Roberts got sent off, scared a break in concentration caused by the distraction of a substitute coming on would cause Blues to concede.

At Bournemouth, Blues could have been 2-0 up but for an offside flag yet found themselves on the wrong end of a defeat after defensive lapses helped the Cherries to win the game 3-2. Karanka couldn’t blame the subs for this one either, with Blues going 2-1 down before he changed things.

Although it’s obvious that Blues’ league position is pretty horrific right now, it would be hard to imagine a manager coming out with a pessimistic interview before a match. As the leader of the team, it’s the manager’s job to show that he has belief in his players and to inspire them to get ove previous mistakes and succeed.

That isn’t going to happen if the boss rocks up to the Thursday afternoon pre-match presser to tell us that morale is bad, the team are worse and that he’s fucked if he knows how they’re going to win on Saturday. 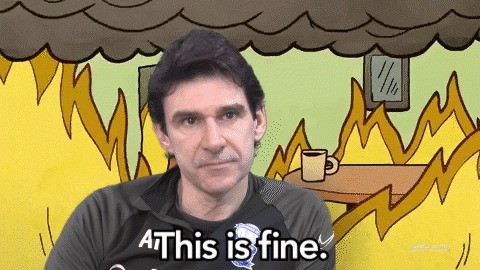 As much as Chris from We Are Birmingham made me laugh with the image above, I’m not sure any more what Karanka can say that makes a difference. He can’t refuse to do the press conferences; they’re mandated by the EFL. He has to turn up and say something – but whatever he says, it’s all just empty rhetoric; after all fine words neither butter any parsnips nor win any points.

Likewise, there are only so many times and so many ways a journalist can ask Karanka why the team continues to play with the same amount of bollocks as a spa full of eunuchs. There is no real answer to that question that makes a difference other than the team showing a bit more fight on the pitch and I guess keeping their concentration.

For some fans, the only real answer that counts would be the removal of Karanka as manager; the sooner the better.

Rumours have gone wild on social media that Karanka’s removal might happen this weekend; however it’s difficult to see that as much more than a bit of a dream for some right now. That being said if I’m honest the other half of that rumour which says that Tony Pulis is the man to come in to replace Karanka leaves me feeling like I’ve woken up from a nightmare.

Not being able to go to the ground to vent one’s spleen at the faire served up by the team isn’t helping either. Regardless of the argument of if it would make the team play better or not, I think not being at the ground is just exacerbating the frustration felt by fans at the situation.

Although there has been much derision of the three year plan™ that was supposedly put into place when Karanka was hired, I do get the impression fans need to know that there is some kind of strategy; that it’s not merely a case of throwing as much metaphorical shit at a wall as possible in the hope that something sticks.

While Karanka has had no choice but to front up before and after every game, his erstwhile partner in crime Ren Xuandong has been quiet, with nary a GIF being posted in months.

Tomorrow evening just after 6 @bbcwm we have a full interview with #bcfc CEO Xuandong Ren. And tune in to Breakfast with @DazHaleWM in the morning for a couple of extracts of what he had to say.

That has changed with the Blues CEO graciously offering BBC WM reporter Richard Wilford an interview to be broadcast later today. However, a quick scan of Blues forums and social media has shown a cynicism that there will be not much groundbreaking info.

I’m curious to find out just how far Ren backs Karanka; if the Blues CEO too believes that everything is fine and it’s just a matter of time before the team starts recording victories too.

My biggest fear from this interview is that Ren sees it as one and done. I know that Wilford is never going to go all Jeremy Paxman on Ren but it’s my hope that it can become more of an open dialogue; that there will be further chats where further information can be gently pried from the Blues CEO.

As a blogger, I don’t have the same pull as Wilford, or Brian Dick of the Birmingham Mail or Tom Ross for that matter. I know that there is no way that Ren will ever speak to me on or off the record – particularly after the “secret meeting” shenanigans of last year.

However, as a shareholder in BSH things are a bit different. As a shareholder, I can ask them questions and they have to reply to me. I emailed them twice to chase them if they were concerned about the league position the club finds itself in, and if they’ve made any contingencies in their accounts for the issues relegation would cause.

While the reply was a touch frosty, it did offer a bit of hope. They told me that:

“The management is highly concerned about the existing status of the Club. We are exerting our best effort to turnaround the situation with an aim to maintain the Club in the Championship.”

As I’ve mentioned before, Birmingham Sports Holdings Chairman Zhao Wenqing has been in England now for over a year. He’s at the games and has seen with his own eyes what is happening on the pitch.

It’s my hope that if things aren’t fine and continue to worse, Zhao will take whatever action is necessary to attempt to fix them.