It might be relegation worries for Birmingham City at St Andrew’s, but in the Hong Kong it’s very much business as usual for Birmingham Sports Holdings. The HKSE listed company announced to shareholders that it was revising its profit warning upwards to around £7m for the six months to December 31, 2020 – and this came on the back of a share price rise which now values the company at close to £320M.

You can check out the full text of the announcement at this link, and the current price of BSH shares at this link.

While it’s good news for me as a shareholder, the rise in share prices by 14.74% at the close of trading on Thursday feels a bit weird. It seems like no matter how badly the players do on the pitch, the holding company is worth more and the stranglehold they have on Blues is ever tighter.

With this in mind I thought it would be a good idea to take a deep dive into the facts and figures of what happened in share trading on Thursday.

I’d like to state in advance my usual caveat that I’m not an expert in any of this, and that if investing in BSH it would behove one to check my workings out thoroughly.

The first thing I wanted to do was to take a proper objective look at the share price, without thinking once about the club or its position in the Championship.

At the close of business on Thursday 18 February, shares in BSH were valued at HK$0.179.

This represents a rise of 14.74% on the day, and of 22.60% over the last month. While it’s not quite the meteoric price rise that Game Stop made news with in the last couple of weeks, it’s still quite a tasty rise in prices.

To find out more data, I’ve used AASTOCKS as I’ve found their technical analysis best for Hong Kong based stocks.

The first thing I thought was interesting was the sheer number of shares traded. The daily volume for February 18 was 426M shares, which is about 70 times higher than the usual daily volume of 6M shares.

In the Hong Kong markets, there are two kinds of trades. The first are called “Block Trades”, which are between large brokers and offer various guarantees that help improve trading conditions. The other kind of trades are unblocked trades, and these are generally between smaller or “retail” brokers. 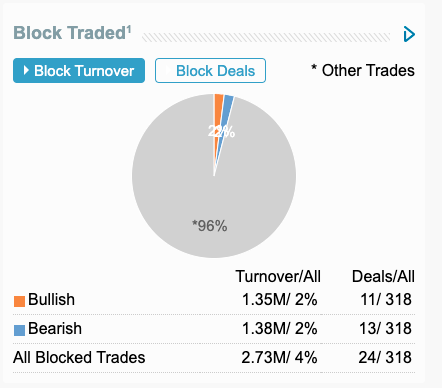 That means that the vast majority of shares traded were done between retail brokers. That in turn means one of two things – either a) a lot of people hopped onto a rising share in the hope of making a quick buck, or b) bigger fish used smaller brokers to keep trades somewhat on the downlow.

I can understand why people would think it was the first option. The announcement denying Blues CEO figures confirmed that the company was going to turn a profit this month and it might be that people see this as a reason for buying into the company. 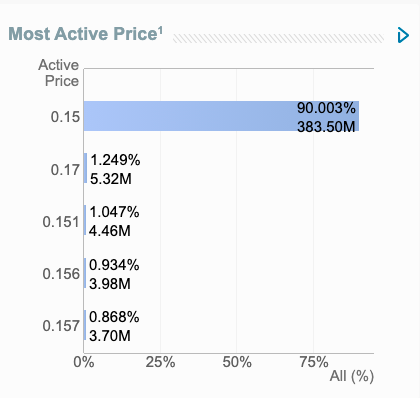 However, I will admit my scepticism. It’s possible to see the prices shares were traded at and the vast majority of trades were done at HK$0.15 – a much lower price than the shares finished on. 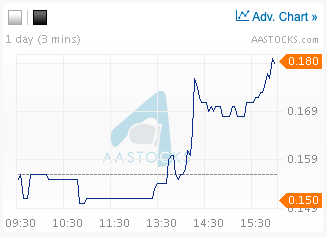 Now, I’ll be honest that I don’t know enough about day trading to understand why the price went up so quickly in the afternoon after so many shares were sold off at the lower price – but my latent scepticism doesn’t give me confidence that the rise in share price is to do with how the company is doing.

With this in mind I thought I would look into the ways that stockbrokers value stocks. I know that they use various formulae to identify value in stocks, and these are easy to find on any detailed stock quote page.

Unfortunately for BSH, the easiest formula to use to judge a stock on – Profits / Earnings Ratio (or P/E for shoert) – is not applicable because it’s been so long since BSH actually made a profit. When the accounts come out next Friday showing a profit that will change, and it will be interesting to see what that does.

Another useful figure is Net Asset Value per share (NAV). This is a simple calculation from the accounts shown below:

AASTOCKS helpfully offer this information without the need for us to break out a calculator, so we can see that the NAV for BSH is currently HK$0.018.

With this figure we can then work out the Price-to-Book ratio or P/B, which is calculated by dividing the share price by the NAV.

Investors ideally want to look for a P/B ratio of 1.00 or less, as that would mean the offered price of the shares undervalue the actual value of the company. Even a score not far above 1.00 is good enough to make the idea of purchasing shares in a company a good prospect.

Using the Thursday closing price of HK$0.179, we get a P/B ratio for BSH shares of 9.702 – which means the shares overvalue the actual value of the company by about nine times.

That confirms to me what I’d long suspected – that the shares are grossly overvalued and essentially a neutral investor shouldn’t touch them with a metaphorical ten-foot bargepole.

Now it might be in the time between me writing this and it being published there has been a correction from yesterday’s gains; however even if that happens it’s unlikely the share price will return to anything like it should truly be.

If the maths doesn’t stack up, that makes me think that there are external reasons why the BSH share price is so high.

The obvious idea to Blues fans is that shareholders are excited because there is a prospect of a new investor coming in. I can’t see that happening for the simple reason the maths argues that buying a large tranche of BSH shares seems a dumb thing to do right now.

Likewise, I can’t believe the share price has gone up because HK is expecting us to sack Aitor Karanka, Ren Xuandong or both. I think that it would take something much more seismic from the club to affect the price of the shares by any great deal. It’s not like BSH have to announce to the HKSE that they’ve handed either of the aforementioned people their P45 either.

I think the reasons for price changes is more nuanced and is more to do with the number of shares available for public trade and the intentions of the larger shareholders.

I think it’s a fact that stock markets are not quite the easiest place to understand the value of a company – or even what it does.

In a follow up article to this piece, to be published next week I’m going to take a deep dive into the other subsidiaries of BSH; what they do, how profitable they are and what chances we have of BSH diversifying their portfolio of companies enough to be able to let go of BCFC.