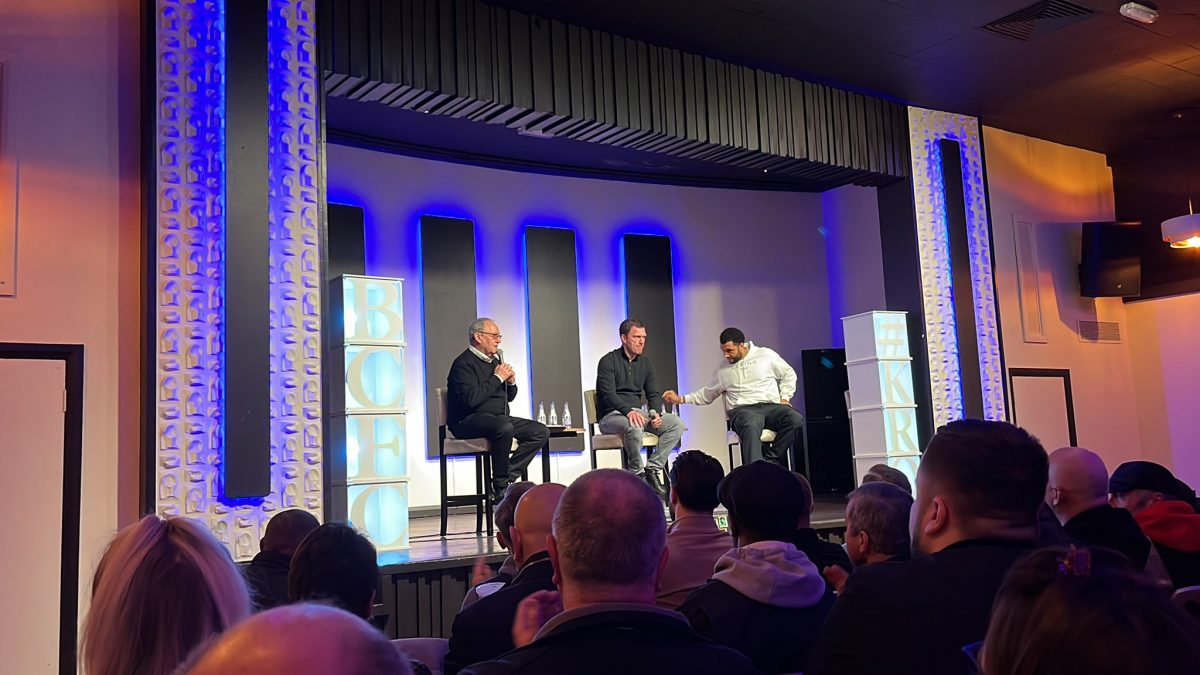 The vibe of the evening was a positive one, and it was clear from the outset of the meeting that both Gardner and Deeney wanted to be as open as they could be.

Gardner came across with sincerity, acknowledging that the club has had many problems in recent years and affirming that it was his mission to put it right. He was at pains to point out as someone who lived in the area he had to try his hardest, as he couldn’t just “jet off to Spain” if it went sour which was maybe a dig at former Blues CEO Ren Xuandong.

Deeney was everything I’d expect him to be as a fellow Chelmsley boy. He spoke with humour, lacing his thoughts with a few ribald anecdotes and plenty of industrial language. It was quickly clear that he took his new role as club captain seriously, and that it his duty to improve the mentality of the squad on the training pitch as much as on matchday.

To try to prevent people monopolising the questions by shouting loudest – as well to amalgamate similar queries, they had people write out questions beforehand, which were then asked by Tom in a conversation on stage which lasted the best part of three hours.

Before I went, I made a list of five questions which I wanted to hear answers to, which I shared on Twitter. 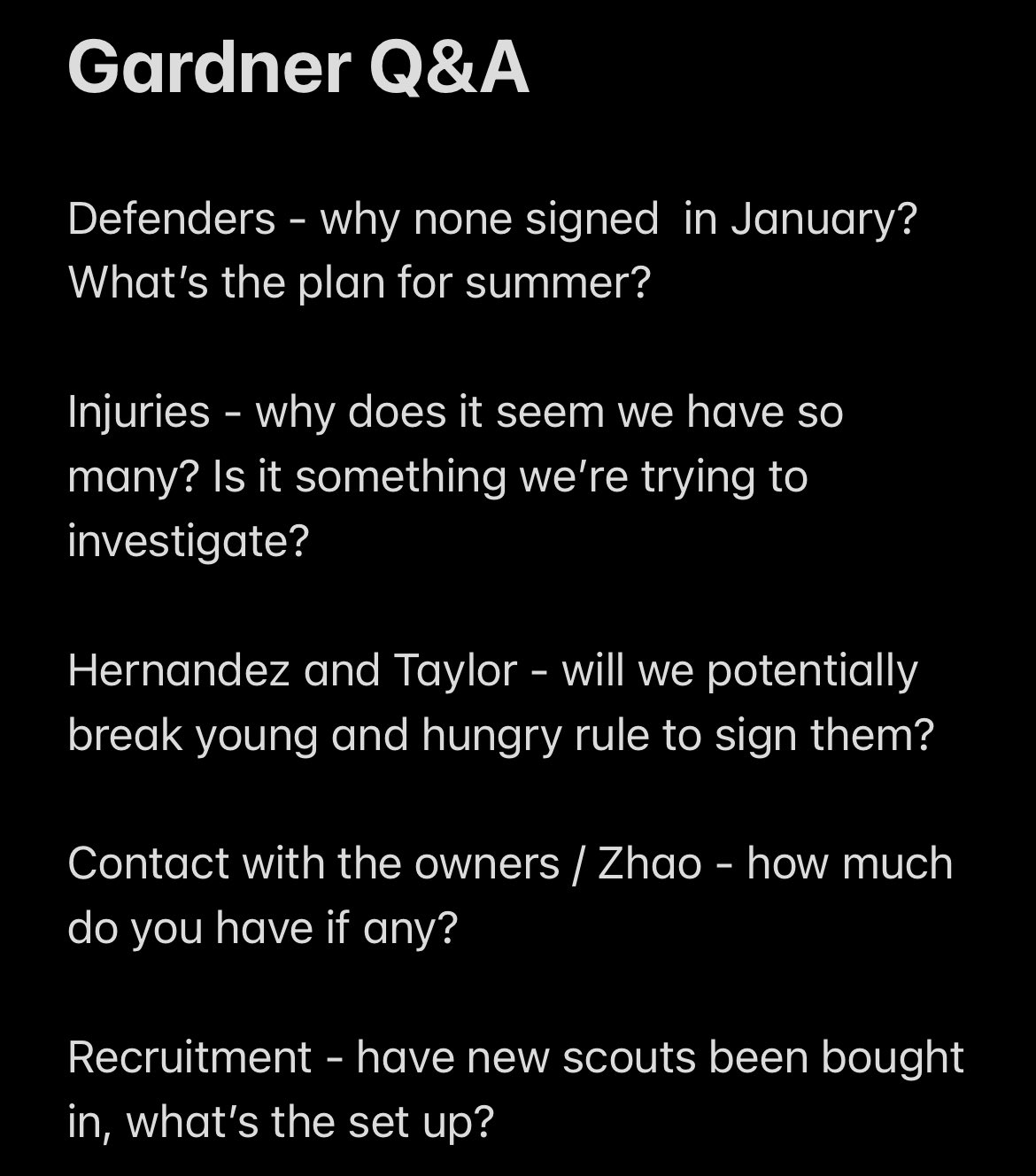 When it came to writing them down, I only wrote down the third and fifth as I was fairly sure the other questions would be covered by other fans.

The defender question came up early, and Gardner was very quick to answer.

Gardner confirmed that they arranged to bring Teden Mengi in when it became possible that Dion Sanderson was returning to Wolves, but when it became likely that Sanderson could also come back Lee Bowyer made the decision that he had enough defenders and that the lack of goals scored by the club was a priority.

What was interesting was when they listed the “9-10 defenders” that were at the club at that time they included Jeremie Bela and Jordan Graham in the list but omitted the names Harlee Dean and Mitch Roberts.

Gardner then pointed out that the club didn’t start losing defenders to injury until February 1 and that it was a freak circumstance to lose so many centre backs at one time.

It was also interesting that Gardner spoke about how literal fans took the idea of a one in, one out strategy. Gardner made it plain that Blues had got Matija Sarkic and Dion Sanderson on “unbelievable deals” and that Teden Mengi was costing the club more than those two players put together.

This was just one example; Gardner said that if someone big came off the wage budget in the summer then it could be possible Blues could bring in more than one player as replacement.

Gardner was clear that the club has to be creative when it comes to player wages; saying the wage bill was ridiculous and “way over £20M per annum” – among the top two or three clubs outside those who are benefitting from parachute payments.

Deeney laid it on the line – that the club had “some bad players on some bad money”; that those players wouldn’t get that much money in the Premier League and wouldn’t be good enough to play there.

In a later question about the “three-year plan”, Gardner also laid it out that the reason for a three year plan was it was going to take two years to clear the wage bill enough to be able to splash out a bit.

One thing I’m in agreement with Gardner about is that people have maybe got the tone of this plan wrong. He said that at no point would Blues not try to win, or not try to be the best team they could be on the training pitch.

The idea of the plan was acknowledging the hideous wage bill the club has, and the latest date that some of those wages can be cleared.

Gardner twice talked about how after two years the wage bill would drop by so much that there would be room for some bigger spending.

Assuming the end of year two is the end of the 22/23 season, then as it stands currently the contracts of Max Colin, George Friend, Harlee Dean, Jonathan Leko, Ivan Sanchez, Jordan Graham and Troy Deeney come to a conclusion at the end of that season.

I’m not sure if it was players from that list that Deeney was referring to with his comment about bad players and bad money; I’m sure people might come to their own conclusions on that point.

It was interesting that Gardner confirmed both Kristian Pedersen and Bela were offered new deals on less money than they are on now which have been rejected; the implication being that both will exit the club at the end of this season.

Gardner also said that he would 100% break his “rules” laid out about young and hungry players if the possibility of signing Onel Hernandez and / or Lyle Taylor became possible – and that he had some discussions with their respective clubs already.

Gardner also answered my question above about recruitment, stating that he is trying to bring in the right people to do the job (giving the example of Martin O’Connor as Loans Manager), and that it would take time to undo the mistakes of the past.

The big thing that came across from Craig Gardner along with new Managing Director Ian Dutton who answered a few questions towards the end was how they wanted to change the culture of the club.

While talk of a sleeping giant is a bit passé for my liking, I do understand what they mean when they say they want to bring an end to the refrain of “typical Blues”.

Deeney talked about a mental fragility around the club he noted on joining which he had not realised was there, and how until he had a captain’s armband he felt restricted on what he could do to fix that.

What I like most about Deeney is there is no bullshit; he talked about how since he has been made club skipper he would not just encourage but bollock players for not showing effort and how he wanted to do help build players into stronger ones.

The club captain also talked about a mentality of players to do “just enough” when he got to the club; to get to the training ground just before the allotted time to do so and to bounce as soon as training ended. Deeney was keen to point out that if the whole team put in a bit more than the required effort, then the results on the pitch would be more positive.

Gardner alluded to this too, saying that when he returned as a player he didn’t realise how bad the culture was in the dressing room. At that time he was that disappointed he went to Zola to warn him that those players were going to get him sacked.

Ian Dutton spoke of this mentality too; he was clear that there had been poor leadership behind the scenes at Blues and that he wanted to change that as well as the working atmosphere within the club.

I think pretty much everyone who attended left feeling positive that the people answering questions cared and would try their hardest for Blues.

We all know that the ownership is a completely different kettle of fish but I think we have to take it as a positive that there is a desire to get things right in Birmingham at least, even if things aren’t right in Hong Kong / Beijing / Phnom Penh.

I’ve said this before, but when Carson Yeung got arrested the reason the club didn’t fall apart was that on a day-to-day basis, the people running it knew what they were doing.

I’d like to have the feeling now that once again should something catastrophic like that happen again, the club has a chance of surviving because the people there can do their jobs.

The constant worry under Ren was that wouldn’t happen because Ren was so spectacularly bad at his role.

I can understand why the sceptics might have seen this evening as a charm offensive because in many ways it was – but what else are people to do to try and win them around when they’re new in a position?

From a personal angle, I find some of this difficult because I’m not very good with social cues and I’m used to being on the outside.

It was nice that Craig Gardner made a point to have a chat to me before and after the event; as well as being able to speak a few words with Ian Dutton and properly introduce myself to Media Manager Dale Moon.

However, I will be honest and say that I need to continue being honest and up front about the problems I see with the ownership – and as much as I’m willing to have a chat with any of those people in the following weeks and months, I also feel I have a responsibility to be honest and transparent with everybody that if and when I’m in that situation.

As with anything, it’s about trust.

Craig Gardner and Troy Deeney said that they didn’t want this kind of event to be a one-off and I want to believe that will be the case.

Likewise, when Ian Dutton tells the crowd that he wants to be approachable and is amenable to talking to people to understand their issues, I want to believe that he will keep that admirable stance even when it becomes jading.

All three were clear that they wanted to do their roles for the benefit of the fans and the club; and that if they weren’t allowed to, then they would walk away. I have the utmost admiration for anyone who can stand by their own principles even when it’s financially costly.

Only time will tell if the trust I want to place in Gardner, Deeney and Dutton is well-placed.

However, all three are saying and doing the right things to start the journey.