There have been better weekends to be a Blues fan. Losing 4-2 to Coventry having been 2-0 up was a bitter pill to swallow, but getting humped 6-1 away to Blackpool the very next game just shows what a mess the team is in. Lee Bowyer looked a broken man sitting in the dugout at half time, and his post-match interview only seemed to confirm he’s losing the will with some of his players.

It could of course be worse. While Blues are now mathematically safe from relegation, it’s only thanks to point deductions handed out to Derby and Reading that Blues aren’t in the bottom three.

Considering all the stuff we’ve (rightly) said about the EFL in the past, it’s almost ironic that it’s their sanctioning of other clubs that has saved us this year.

With Blues being safe from relegation, there can’t be any complaints from anyone now that being negative about the club is going to affect what is on the pitch – and so now (for me at least) is as good a time as any to try and conduct a proper analysis of what is wrong with the club and what can be put right.

The fourth goal scored by Coventry on Good Friday summed up everything I’ve come to loathe about the Blues playing squad. 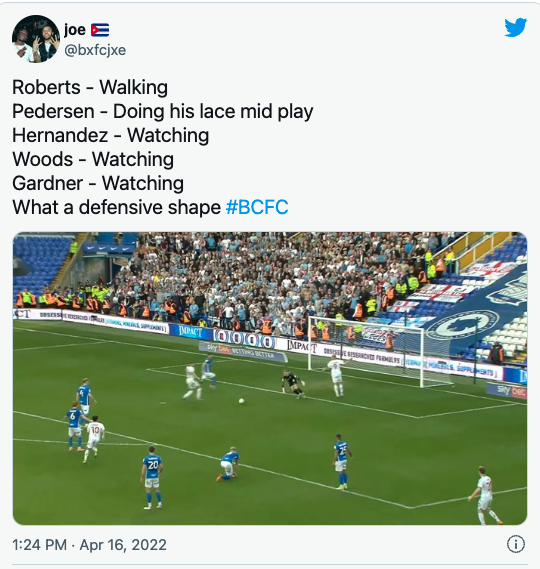 Whether it’s Kristian Pedersen deciding that was the optimum time to tie his shoelace, Gary Gardner and Ryan Woods ball-watching or Marc Roberts ambling back into the box, everything about that goal was wrong.

Four players who between them are earning between £3m and £4m a year in basic wages from Blues, deciding that they’d had enough that day and leaving it to the poor young keeper to try and keep it out.

Pedersen throwing his hands up after the goal was scored in what looked like mock frustration was just the icing on the cake.

While I’m not going to revise history and say that managers like Aitor Karanka or Steve Cotterill were anything other than awful, the fact is that three of those four players have been with the club for at least three years and have been a constant in the ongoing failure the club has been through.

Whether it’s a lack of skill, a mental fragility as alluded to by Troy Deeney and Craig Gardner at the Q&A held a couple of months back or just a simple lack of desire to do anything more than minimum, there is something wrong.

Unfortunately, one of the chief problems is that apart from Pedersen who will leave at the end of this season, those players are contracted to the club until 2024. It’s not just those players above either; the squad is littered with players who are on long, expensive contracts who need to be moved on.

As much as I agree with those people on social media that I’d like to show them the door this summer, unless the club can find someone to take those players then they can demand a payoff or sit out their contracts. Even if we can move them on, it’s probable that the club will end up having to cough up money so that these players will take a pay cut to play somewhere else.

While I agree that Craig Gardner was wrong to talk about a three-year plan, I think people need to not take it as literally as it sounded. The gist of what Gardner said when he talked about this was that the club need to move on players to progress, and It’s going to take time because of the length of these contracts.

Until these players are gone, it’s going to be hard for the club to progress – and It’s going to hamper in efforts to bring in replacements because the money clearly isn’t there to be hosed on the club anymore.

From the outset, I’m going to be honest in my belief that Bowyer’s time as manager should come to an end. It’s clear from Brian Dick’s post-game report he’s not going to walk which means the club are going to have to give him his P45 to move him on.

I desperately wanted Bowyer to succeed, if only to break this horrific run of going through managers the club has had. Changing managers on a yearly basis doesn’t work and it’s only going to end in further misery.

The Gaffer reacts to #BPLBIR. ?

I even think I agree with what Bowyer said about formations and shape; that if the players don’t do the basics, then it doesn’t matter who plays where because it’s just going to be dogshit.

That being said, I think it’s the job of a manager in any place of employment to lead and to inspire; and I honestly don’t think Bowyer is able to do this. I believe that as a manager one is paid to make decisions and take responsibility for the team, and if that team doesn’t perform it is a reflection on the manager as much as the team.

At the time of writing this, there has been no word on Bowyer being given the Spanish Archer, and despite some of the tweets out there that say different I have no idea if it will happen any time soon.

Sacking Bowyer is a financial decision as much as a sporting one; unless there is a specific break clause in his contract Blues would have to pay up the remainder of his deal (one year and a bit) to move him on.

This begs the question if the club can even afford to sack him outright.

If Bowyer remains recalcitrant in his desire to not quit, then the only solution would be some sort of mutual agreement – and again, Bowyer would be within his rights to demand everything he is entitled to.

The good thing is with Blues being safe from relegation, it’s not as important to decide about Bowyer immediately. I know many fans would like an instant decision but as much as I’m done with this season, I’d much rather a proper thought through plan to decide how the role will be filled afterwards than a rush appointment as some vain notion to appease angry supporters.

The appointment of Ian Dutton as Managing Director has done much to quell some of the displeasure about the board, Birmingham Sports Holdings and the owners but I think the Blackpool result will bring that sharply back into focus.

Many people on social media have alluded to the fact that they cannot see much changing at the club in the long term even if Bowyer is replaced, such is the mess behind the scenes.

Many long-term fans have stated that they won’t renew their season ticket, as they have lost patience and love for what Blues have become.

It almost feels a bit monotonous to say this, but I can’t disagree that the crux of the problems that the club face come down to mistakes made by the board and the owners of the club.

Unfortunately, the owners are the biggest problem to deal with as it’s very difficult to make someone sell something if you aren’t buying it; that is made even more so by the convoluted nature of the Blues ownership, the stock listing on the Hong Kong Stock Exchange, not to mention the involvement of the elusive Mr King, Wang Yaohui.

It’s important to mention that these owners have put a lot of money into the club – in the last accounts the debt to BSH and Oriental Rainbow Investments stood at over £110m and it’s almost certainly grown since then. I’ve seen people refer to the owners as “asset strippers” but nothing could be further from the truth; they’ve just wasted the money they’ve put in and lost interest.

I can’t speak for anyone else, but my beef has always been that the model of sugar daddy owner doesn’t work, and that this lack of financial prudency has just landed the club with not only debt to the owners, but unviable contracts with players and a stadium which is now falling apart and out of the club’s ownership.

Throw in the lack of transparency of where the money has even come from and the undertones that come with that, and for me it’s always been a recipe for disaster.

Right now, I think as fans we have a difficult choice to make.

We can carry on blithely supporting the team without thinking about any of the bad stuff, because as supporters that is our job. We sing about “joys and sorrows”, and to “keep right on to the end of the road”, thus we have to suck it up and get on with it.

We can turn our backs on club as a waste of time, effort and emotion and go do something else with our Saturday afternoons. It’s been a tough decade for us as Blues fans, nothing is getting better or is likely to get any better soon, and frankly life is too short for that kind of bullshit.

Or we can do something in the hope of forcing change and maybe getting a better football club out of it. Unless we actually do something to try and make a difference, how have we got a right to moan?

I understand the reasoning for any choice a fan decides to make right now, and I’m not going to say anything derogatory to anyone who chooses something different to my choice.

I’ve been a BCFC sticky beak now for more than 11 years.

While this blog is nothing like my full-time job, I’ve invested a lot of time and effort to make it what it is and while it often doesn’t look like I’m doing much, I promise you that I am trying to make change happen in my own way.

I’m especially thankful to those who are supporting me on this path, and I hope we all get a better Blues to support, regardless of what personal choice we make.