It’s now been over eight weeks since Blues fans were told in a Birmingham Mail / Mirror report that the takeover was “close”. Despite being told in an announcement to the HKSE three weeks ago that Vong Pech had agreed to sell his share and a “deadline” being given by Bassini of June 30, as Blues fans we still await any official confirmation that any deal has been done.

I’m going to say it here and now, I’m tired of the whole takeover saga.

Despite the fact nothing official has been said for weeks, it feels like so many people are jumping on the hype train thanks to gifs and tiny scraps of information thrown at them like breadcrumbs to pigeons around St Philips Cathedral.

Rather than once again rehash the news (or lack thereof), I thought it would be better to talk about how we know what we know – and why I believe we should be careful in who we listen to.

Anyone who has watched me on a podcast in the last few months will know that I’m fond of a pretentious quote, and one of the pretentious quotes I’m most fond of is the “shattered mirror” quote from the Kasidah of Haji Abdu El-Yezdi.

“All faith is False, all Faith is true:
Truth is the shattered mirror strown
In myriad bits; while each believes
his little bit the whole to own.”

This mystical quatrain from a pseudo-religious book by Sir Richard Francis Burton talks about our perception of truth and how we naturally seize onto small pieces of truth thinking it’s the whole story, without realising the piece we have seized onto is only a small piece of a much bigger thing.

People seize on information they receive from inside sources which they then repeat as gospel.

It’s an easy to understand – after all, if you’ve got information from someone at the top then surely it’s accurate, right?

Unfortunately, like everything else football news has multiple angles and perceptions.

Take this takeover story for example.

We’ve heard lots from Laurence Bassini about his consortium, and we’ve had reports from Neil Moxley who is closely linked to both Keith Harris and Craig Gardner.

Therefore when Moxley tells us about the takeover happening this week, we should give serious credence to the story because we know it’s come from good sources.

The problem is this isn’t the first, second or even the third time we’ve heard that the takeover will be all done “this week”.

Every time it’s said and it doesn’t happen, that veneer of credibility fades as it becomes more and more obvious that things maybe aren’t as straightforward as we once knew.

While I’m not a journalist, I like to think I try to adhere to proper journalist principles.

One of those principles is to source a story from as many angles as possible to build the most accurate picture possible.

I try to ensure I have at least two completely separate sources before I publish something; on contentious stuff I aim for three.

This means that while I take what Neil Moxley says as a source, I need to find a second source to corroborate the story which is completely separate from Neil or anyone on the buyer side of the deal.

Throughout this whole saga, it doesn’t feel like anyone else has tried to make the connection with the owners in China or Cambodia to see what they have to say.

Now I know what you’re going to say.

Birmingham Sports Holdings can’t say anything because they’re not allowed to.

This is absolutely accurate; but if we’re going to hold the owners up to this standard then we should by rights hold the buyers up to the same standard as they shouldn’t be disclosing anything either.

As it’s clear that information is leaking out of the buyer side, then I think it’s only right to approach BSH / the owners to get their take on it, even if that information is given anonymously or only as background and not to be directly referred to.

If we can get an understanding of where they’re at and what their motivations are, we’re in a better place to understand where the deal is at as a whole and we do not need to be so hyperbolic about when it is happening.

How do we find out more from the owner’s side?

One of the big issues about speaking to the owners or BSH in this deal is the physical and metaphorical distance between us. Not only are people like Vong Pech or BSH staff on the other side of the world, many speak English as a second or third language if at all.

It’s not easy to communicate with people in this way, and in my experience many people when faced with this kind of issue shrug their shoulders and say it can’t be done.

Unlike many of those in the press in the UK, I have a better connection to people both in Hong Kong and Phnom Penh.

My travels over the last nine years to both places introduced me to people and from there I’ve built up relationships which has helped me to understand more of what is going on in the Far East.

As I see it, I have two routes to try and find out the BSH / Vong Pech point of view; the official and unofficial.

The official route is the easier one.

On Monday night I sent an email to the BSH Company Secretary Robert Yam Pui Hung. In the email I outlined that as a shareholder in BSH I was disappointed by the lack of updates on the takeover released to the Stock Exchange; particularly as news of the takeover was continuing to leak in the UK.

I also forwarded a link to an audio file kindly supplied to me by Ian Danter and Talksport, of the interview with Danter and Moxley on Talksport on Monday afternoon; asking Yam and BSH for their comments on the points raised – particularly that the change in management had been agreed with “Prospective purchasers”. 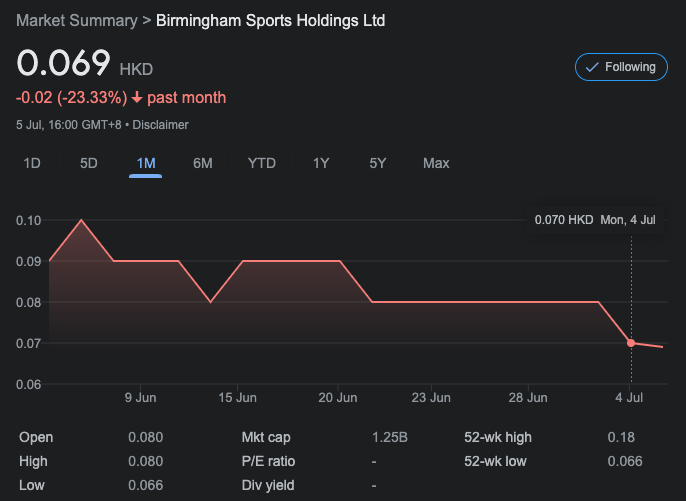 I finished by pointing out that the share price in BSH has bombed in recent weeks as this has dragged on and that BSH have a duty to investors in their company.

As of yet I have not received a response.

However I expected this and last night I sent a second email; this time to the HKSE.

This email is my third email of complaint about the lack of announcements from BSH and has pointed out that it is best practice for companies to issue updates after 21 days or so on issues that are market sensitive – and that today is 22 days since the last update.

The last time I made a complaint we got an announcement and I’m hopeful that we should get another one which will give further confirmation as to where the takeover process is.

The unofficial route is harder.

This entails me trying to contact people such as Vong Pech, Paul Suen Cho Hung or even the elusive Mr King, Wang Yaohui directly to ask them for comment.

Now, despite what some people think who have emailed me over the years it’s not that simple to just email someone for an answer.

For one, it’s not like there is a public directory of email addresses, and for two my written Mandarin is still very limited.

Yet this is not a reason to give up.

I’m lucky in that I’ve spent time in both Hong Kong and Cambodia over the years, and while I’ve yet to meet any of Vong Pech, Suen or Wang face to face, I have physically met people who are close to all three.

I’m currently doing my best to speak to those contacts I have made in the past to see if I can get from them a feeling of what is going on with the would-be sellers.

This is particularly important with regards to Vong Pech as we know he has agreed to sell his stake – but we don’t know who to, and what constraints are on that deal.

If I can get any extra information about this deal from that side, I think I then have a chance to properly explain what is going on – and maybe we’ll be in a better position rather than relying on gifs to work out where the club is.

There is no doubt that I’ll get criticism from some; there will be accusations of back-tracking or whatever else fits the current narrative in some quarters of the fan base.

I’m fully aware I can’t please everyone, but I hope by explaining my thought process and what I am doing people will understand better why I put forward the views I have.

I’ve long stated that it’s the job of anyone reporting on this takeover to remain agnostic about any bidder wherever possible; to report on facts and information rather than cheer lead.

I fully intend to continue walking this path because it’s the only way forward.

I want fans to be excited and hyped for the future, but it’s important to me that I don’t promise anything that I cannot ensure happens myself.

I hope people understand that.