Two more names have been added to the ownership mix thanks to the latest announcement to the Stock Exchange of Hong Kong. Chigwell Ltd and Dragon Villa Ltd are the latest names to be confirmed as part owners of Birmingham Sports Holdings and by effect the club.

The full text of the announcement can be viewed here.

What does this mean?

BSHL have confirmed to the stock exchange that there has been a subscription agreement with two new subscribers. As a result, the ownership of the holding company has changed slightly, and by extension, the same has happened to the club.

With the new shares in place, the new ownership structure of Birmingham Sports Holdings looks thus:

As neither Chigwell nor Dragon Villa own more than 10% of BSH or BCFC, they will not be required to take the Owners and Directors Test.

Who are these people?

As a BVI company, Dragon Villa are pretty much untraceable as it stands.

However, as Chigwell Holdings Ltd is a HK company I have managed to track down some details via the HK Company Registry as to their ownership.

According to documentation from the HK company registry, Chigwell Holdings Ltd lists as of their last annual return one director – Xia Zengjiang and one shareholder, a BVI company called Lainn Yee Ltd – which is like the aforementioned Dragon Villa pretty much untraceable – by normal means.

Both Lainn Yee Ltd and Dragon Villa are listed on the Offshore Leaks Database in the Panama Papers. 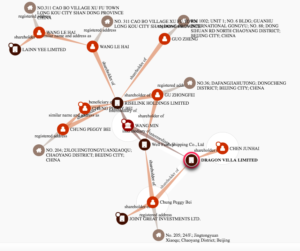 As both companies are now interested in more than 5% of the shares in BSH, disclosures will have to be made to the HKSE within the next three days.

Does this mean much to BCFC?

Realistically no – it just means more people have put money into the holding company – however until they are either made directors or own more than 10% of BCFC the EFL will not be interested.

However, when the disclosure documents are made available I will report further on these.