On Friday, Birmingham Sports Holdings made an announcement to the Hong Kong Stock Exchange that they had issued just over a billion new shares in the company to repay debts to two third party lenders. An investigation into the two companies and their owners has shown that both companies are connected both to the elusive Mr King, Wang Yaohui.

You can read the original announcement at this link.

On a personal level, I have to admit the deal was displeasing. As a shareholder in BSH it meant my shareholding was even more devalued; while it appears the work Chris from We Are Birmingham and I put into the Spaghetti Junction graphic has now gone to waste. We are however working on an updated version.

However, the deal is important for BSH in its efforts to reduce debt, and to us because it shines more light on Mr King. You can read my previous pieces in this series by clicking this link.

Coming in 2021, Birmingham Sports Holdings had a debt problem. The company had two loans with external lenders, both of which were to expire in the near future.

The first facility was with a company called Global Mineral Resource Holdings Ltd and was entered into on May 8, 2018. This was then extended by a supplemental loan agreement on November 18, 2019. As of Friday, BSH owed a total including interest of HK$71.3M (about £6.75M), with the term of the loan coming to an end on June 30.

The second facility was with a company called Join Surplus International Ltd and was entered into on August 10, 2018 and extended on March 11, 2019 and December 31, 2020 respectively. This loan was to come to an end on March 31, and as of Friday BSH owed a total including interest of HK$68.7M (about £6.5M).

The problem BSH had is one they’ve had every other time a loan facility has come to an end – they didn’t have £13.25M to pay off the loans.

Luckily for BSH, there is another option. Instead of paying off these two companies with cash, they can create new shares in BSH and offer those in lieu of money.

With a share price of HK$0.13175 used, Global Mineral were issued 541M shares while Join Supply picked up 521.576M shares. While these are sizeable numbers, neither company breaches the 5% threshold which means they have to file a disclosure with the Stock Exchange.

Of course, with another billion shares out there this means every other shareholder sees their percentage stake in BSH (and by extension in BCFC) diluted.

One would think that would force the stock price down; yet by close of business on Tuesday 19 January, shares had gone up to HK$0.151 from a low of HK$0.140 on Friday afternoon, valuing the company at a tasty £275M – £12M higher than it was last week.

This deal should massively reduce the level of debt that BSH has. However, we will know more when the interim accounts for the six month period to December 31, 2020 for the company are released. This should be on Friday February 26, 2021.

Both Global Mineral and Join Surplus are BVI companies, which means trying to get hold of any company registry information is impossible.

Using this information, some time spent searching online has yielded some interesting results.

Join Surplus International show up on the ICIJ Offshore Leaks Database, where they are connected to Wang Feng and Riselink Holdings. 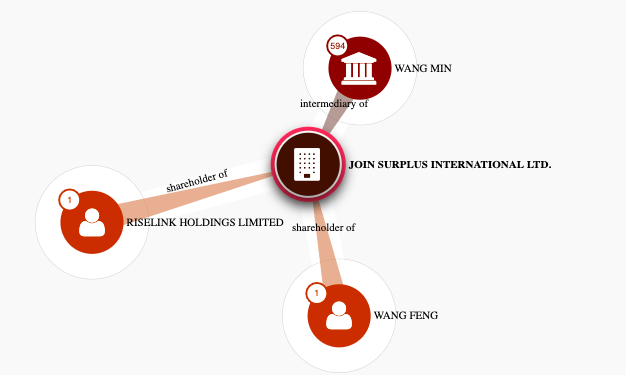 Riselink Holdings has been mentioned on this website before, as it is a company that is based at Mr King’s offices in Hong Kong – as evidenced by this photo I took when I visited them in 2018. 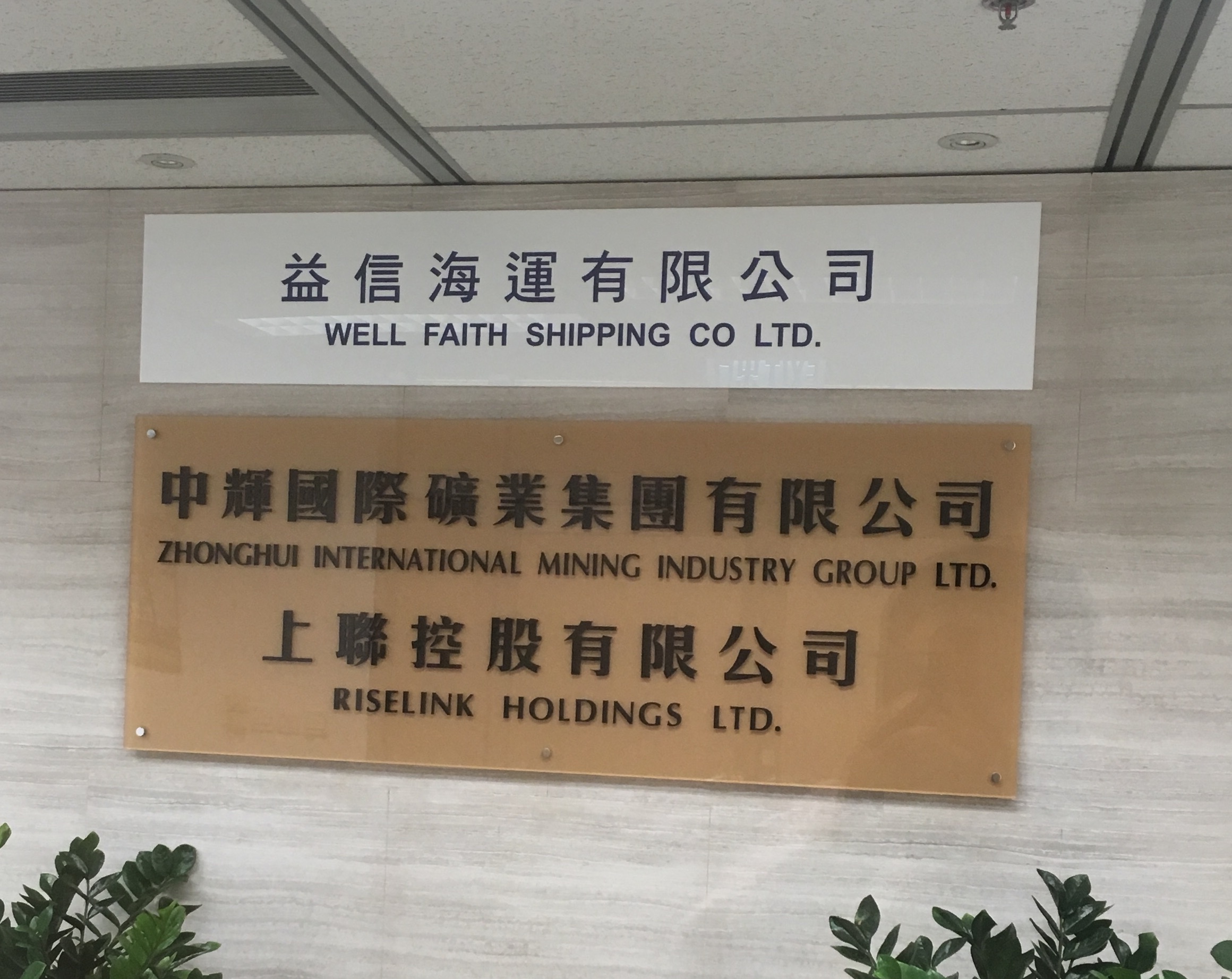 Join Surplus also show up in the company documentation I have collated on companies attached to Mr King in Hong Kong.

However, a search of the Hong Kong company registry comes up with no other directorships for Wang Feng.

Despite the BSH announcement stating:

I was unable to find anything in English relating to the company or Jia Yuchuan.

What’s also concerning is that Jia is linked by qcc.com to the aforementioned Wang Feng and Gu Zhongfei, along with Dragon Villa owner Lei Sutong (another known associate of Mr King’s).

Some initial research into the companies listed on qcc.com has shown further interconnections which would solidify my opinion that both Wang Feng and Jia Yuchuan are frontmen for Mr King.

Jia Yuchuan also serves as legal representative for 北京一禾启程商务管理有限公司 (Beijing Yihe Qicheng Business Management Co Ltd) which lists Dragon Villa owner Lei Sutong as “Supervisor”. This company has red flags all over it, having failed to pay debts and fulfil its legal obligations.

Further investigation is now underway to confirm the full extent of the connections between Lei Sutong, Wang Feng and Jia Yuchuan to check that there are no issues with regards to connected shareholders or transactions which need to be brought to the attention of the HKSE.

However, what these initial findings would seem to prove is my previous assertion that the third party lenders to BSH were all connected to Mr King was accurate.

Changes to Ownership of the Club

Although this transaction introduces two new shareholders to the holding company, it doesn’t change Vong Pech from being the largest shareholder in Birmingham City.

Calculated ownership figures for the club are

To simplify this, we can exchange the names of people who are connected to Mr King to give us

While this seems overly complicated, this is the problem with Blues being owned by a listed company – especially one that does not have a majority shareholder.

I have the impression that Mr King doesn’t want any of his front men to own more than 30% of BSH as it would force them into making a general offer for all shares; likewise it’s important for him to keep enough distance between each of his frontmen so that the HKSE do not see them as shareholders working in concert and apply the general offer rule.

It would appear that Mr King has got himself into trouble in China again.

On January 11, an announcement was made on the Shanghai High People’s Court website that as they couldn’t find Mr King, they were making it public he was being served with a complaint connected to a loan dispute. Once a period of 60 days has elapsed the complaint will be considered served, and Mr King will have 30 days to provide a defence or he will be considered to have defaulted.

A search of companies involved show that Mr King has definitely got himself into a spot of bother with loans of late.

On September 29, 2020 another complaint was filed against Mr King for a total of £7.4M in overdue loans, interest and penalty interest by another company; in this case Shanghai Huitong Intelligent Technology Co Ltd. The case was to be heard in the Shanghai First Intermediate People’s Court on December 22, 2020; as of yet I’ve not been able to get hold of any court documents confirming the outcome of the hearing.

What’s interesting in this case is that the loans are only from 2018; long after Mr King left China following the ABC bribes-for-loans scandal. It’s clear that Mr King isn’t short for a few bob, judging by the money he’s put into BCFC. This makes me think that it’s possible while King has money outside of China, he might be struggling to move it around or into his homeland.

Whether that will have any effect on what he does with BCFC remains to be seen.

One thought on “The Elusive Mr King Part VIII”