Not much is known about the current largest shareholder in Birmingham City, Vong Pech. Although he owns just over 40% of Blues via Cambodian development company Graticity Real Estate Development Ltd and BVI investment company Oriental Rainbow Investments, nothing has been forthcoming from Vong about his purchase of a tranche of the club. In this third piece on Vong, I’ve taken a look at another project he part-owns in Cambodia, and it’s links to another Hong Kong listed company.

You can read my two other pieces about Vong Pech here and here.

Back in September last year, an announcement was made by two companies to the Hong Kong Stock Exchange about purchasing a stake in a Cambodian development project.

For the sake of convenience, I’m just going to refer to one of the companies involved – Hao Tian International Construction Investment Ltd (1341.HK) – as it’s complex enough as it is without going into that detail just yet.

The deal was this: HTICI was to buy a company called Alcott Global Ltd, a BVI investment vehicle which in turn owned 22% of a Cambodian company called CESIZ (Cambodia) Co Ltd.

HTICI confirmed that CESIZ had been granted by the Government of Cambodia the right to establish a Special Economic Zone (SEZ) in Koh Kong Province, Cambodia. They also confirmed that CESIZ owned the land in question that was to be developed, which is 6.66 square miles in size. The land is apparently worth in excess of US$650M.

The cost of this purchase was HK$1.125bn (about £105M), which as seems normal for these sorts of deals was to be paid in equity in HTICI.

So far, so boring.

However, when HTICI released the full details of the deal to shareholders before they voted on the deal at an EGM, the deal became of much more interest to us.

In the letter from the board, HTICI confirmed that while they are buying 22% of CESIZ, the other 78% of the company is owned by Vong Pech.

A search of the Cambodian company registry also confirms that CESIZ only has one director – also Vong Pech.

The letter to shareholders also divulged details of the management team of CESIZ.

The CEO of CESIZ is a guy called Qu Shiqin, who as well as being CEO of this new project is also listed as being “Chairman of the Board” of Graticity Real Estate Development Co Ltd, where he is responsible for the development and construction of the Phnom Penh No 1 Project as well as preliminary planning for the Phnom Penh World Trade Centre.

Strangely, a search of the Cambodian company registry doesn’t list Qu Shiqin as chairman of the board of GRED; instead it listed as expected Vong Pech.

More interestingly, the letter notes that Qu was also General Manager of Blue Harbor Co Ltd, a Beijing based company which ran the Beijing Blue Harbor Commercial Plaza. I’ve mentioned Blue Harbor before, as it is the company the elusive Mr King (aka Wang Yaohui) owned and ran when he got caught up in a bribes-for-loans scandal that saw a bank executive convicted and imprisoned for accepting bribes.

There are four deputy CEOs beneath Qu, all of which have connections to GRED. 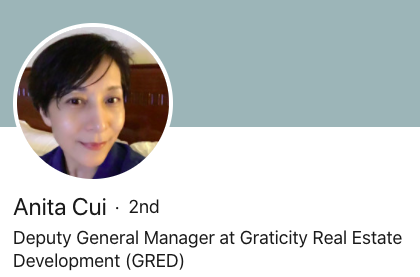 The most prominent is Anita Cui Xiaohang, who was also CFO at Blue Harbor and in charge of finance management at that company. She serves as deputy manager at GRED and is responsible for finance, marketing and commercial leasing at One Park.

The circular also offers a little bit of back story as to how HTICI got involved in the deal to buy a stake in CESIZ, and confirms that Vong has interests in natural resources, financial services and the aviation industry in Cambodia. This ties up with links I have talked about between Vong and Asia-Pacific Development Bank and also with Cambodian Natural Gas Corp.

There is no specified period specified by the Government to develop the land in question, allowing CESIZ to do so at its own leisure. In the circular there is talk of development of a “smart city”, with various zones such as an “ecological park” and a “meditation and recreation zone”; in essence a lot of buzzwords familiar with Chinese development projects.

Of course, there are problems to overcome for HTICI. The development cost of the project is US$290M over seven years, and CESIZ are expecting to take out a loan of US$30M to get the ball rolling. There has been no mention of where that money will come from.

Regardless, the deal was approved by shareholders at the EGM, and now it’s full steam ahead for both CESIZ and HTICI.

So how does this affect Blues?

There are two conclusions I want to put forward about this.

I guess the positive angle one could take from this is the fact that this proves Vong Pech (or whoever is backing him at least) isn’t short of dough. Based on the ground value alone, that makes Vong Pech’s stake in the project worth in excess of US$500M – and this is just one of about 30 projects connected with Vong in Cambodia.

However, I think it would be wrong for fans to jump to the conclusion that Vong is minted and we’re going to spend millions in the transfer window again.

I’ve touched on it before, but Cambodia isn’t the best of places to nail down solid facts about finances. There is a lot of debate surrounding how much money Chinese businesses are putting into the country and the levels of corruption surrounding projects such as this one.

One thing is for sure. I think watching what is happening in Cambodia is going to be important to understand Blues’ owners in the future.