In the final part of my series of articles based on my trip to Cambodia in March 2022, I have taken a look into the elusive Mr King, Wang Yaohui. While Wang was born in China, I’ve previously published a copy of his Cambodian diplomatic passport in the name of Wan Sokha and mentioned his connections with businesses there. Were the rumours of his connections with Vong Pech true?

As interesting as I found it that I obtained proof that Vong Pech was not born with that name (even if the EFL don’t seem to care about it), the biggest aim of my trip was to find the missing pieces in the jigsaw that prove that Wang Yaohui is the power and money behind Vong Pech.

I knew that this was not going to be an easy task, and that Wang Yaohui’s predilection for using front men and false names was going to hinder my progress. However, that didn’t mean it was impossible.

In my last article, I mentioned a company called SEATEL. This is a story of how a struggling mobile phone company in Cambodia could have some massive reprecussions for Birmingham City. 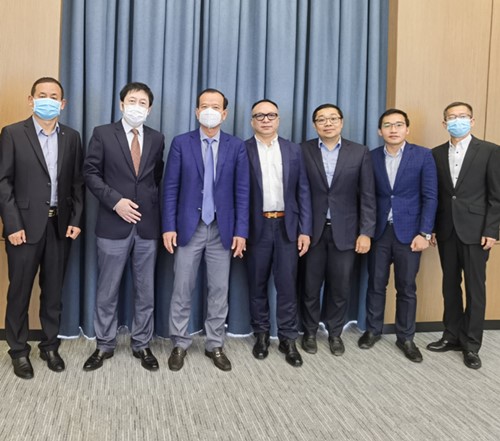 To start this story, I need to introduce you to a company from the British Virgin Islands called Eastern Bliss Group Ltd (EBG). The picture above is taken from their website (www.eastern-bliss.com) and shows the Cambodian Minister of Post and Telecommunications Vandeth Chea receiving a courtesy visit from South East Asia Telecom (Cambodia) Co Ltd (SEATEL) delegates.

Second from the left in the dark blue jacket and red tie is a gentleman which the accompanying article names as Patrick Wang, who is the Chairman of the board of directors of “Hong Kong Eastern Bliss Group Ltd”. While it’s difficult to see with the mask on, I can reveal that we know Patrick Wang by another name – that of Vong Pech.

A look through the corporate structure on the website doesn’t mention Patrick Wang (or Vong Pech) anywhere else – which seems kind of strange as the guy who is Chairman of the board. In fact, a search online for “Patrick Wang” in any connection with Cambodia draws a blank.

Their website corporate diagram shows that EBG holds all their companies via another company called South East Asia Telecom Group Ltd. Unlike EBG, that company is based in Singapore which means for a small fee it’s possible to obtain documents listing directors and shareholders.

The Annual Return filed by the Singaporean company lists a few names as directors that don’t appear on the page linked above. While I don’t recognise them all, there are three that I do.

First of all is Zhao Wenbo. Back in 2018 a company called Chigwell Holdings took a stake in Birmingham Sports Holdings in return for a loan they had made to the company. The documents I pulled from the Hong Kong registry then showed that company had one director – Zhao Wenbo, and that their registered office was 802-804 Jardine House – an office that is regularly linked with Wang Yaohui.

Secondly, there is Leong Chee Kong. I’ve mentioned his name before in articles on this website as the Singaporean driver for Wang Yaohui. He is also a director of a number of other Singaporean companies that I have connected to Wang.

Third up is a Chinese citizen by the name of Wei Shuai. You might remember him from my previous pieces from Cambodia, where I mentioned he was Wang’s driver in Phnom Penh. Evidently being a driver for Wang is a lucrative job, which seems to require as much time attending board meetings as it does shifting gear.

A flick through the business profile I pulled for that company from the Singaporean company registry shows that Eastern Bliss Group Ltd are one of a number of shareholders. Assuming all shares have equal weight, using the numbers given on the business profile EBG owned 56% of shares at the time the AR was filed.

I also managed to get a copy of the accounts for the company for the year ended 31 December 2020. As well as confirming that the three names listed above were only appointed to the board on March 26, 2020, the accounts have a note from the auditors qualifying the accounts.

The basis for the auditors qualifying the accounts is that they were not provided with necessary documents and information to assess the investment in subsidiaries of US$291,636,186. 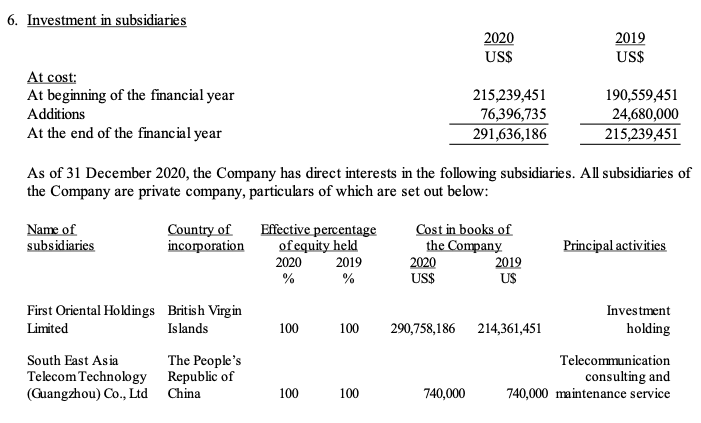 This represents the entire investment in subsidiaries; US$290,758,186 in First Oriental Holdings of the BVI which owns the Cambodian segment and a further US$740,000 in a company called South East Asia Telecom Technology (Guangzhou) Co Ltd.

In other words, the accounts are pretty worthless.

So, we’ve got an iffy Singaporean company owning a Cambodian company which might have connections to Vong Pech and Wang Yaohui. It’s interesting – but it’s no smoking gun.

Had I not gone to Cambodia, I don’t think I’d have got much further than the above. Another trail of dodgy companies, more links to Wang Yaohui but nothing that I can hang my hat on as definitive proof that Vong Pech works for Wang Yaohui.

One of the things I’ve found about visiting places in connection with BSH and the owners is that even when it seems unlikely, it’s possible to find out more on the ground.

Being in Phnom Penh meant I could speak face to face with people I’d corresponded with by text and email. It meant they could introduce me to people who might not want their written details out, and that they could show me things without having to send me a copy.

It also meant I could see for myself what the situation on the ground was.

When I landed at Phnom Penh airport, one of the first things I dealt with before getting a taxi to my hotel was to get a sim card for my burner phone, so that I could tether my regular phone to it and use data in Cambodia without parting with an arm and a leg to my regular provider.

Outside the arrivals entrance to the airport, there are a few shops dedicated to the local mobile phone providers hawking their wares to tourists like me. The one brand that was noticeable by their absence was YES/SEATEL – which made me wonder just how big a mobile phone company they were in Cambodia.

Sure, they appear to have a massive office block in One Park but it could be just a huge sign on the top of an empty building. Even outside that office, I saw a parasol advertising one of YES/SEATEL’s rivals, Smart, with a guy sat on a plastic garden chair trying to drum up business for some sim cards.

From talking to people who know the mobile telephony market in Cambodia, YES/SEATEL are in trouble. I have seen formal complaints made against YES/SEATEL by one of their rivals stating that SEATEL’s equipment has been interfering with the frequencies that their competitor uses; and I’ve seen photographic evidence that SEATEL equipment (masts and boxes) has been ripped out as a consequence.

Cambodia isn’t like the UK when it comes to business practices; for example there are no McDonalds restaurants in Cambodia because when the tycoon who wanted to get the franchise couldn’t, they pushed the government into making it impossible for anyone else to get the franchise. Hence it’s impossible for anyone to get a double sausage mcmuffin while hungover in Phnom Penh – sad face emoji.

However, being in Phnom Penh meant I could ask people questions about what was going on and get answers I might not have got by email.

One of the answers I got blew my mind.

The sensitivity of the document means I can’t tell you how I got it or what it is. However, I will publicly confirm that I have in my possession a document that confirms:

I’ve taken the precaution of sending this document among others I have to my legal advisors for safekeeping.

This is the first time I have got written evidence that Vong Pech is working for Wan Sokha – and we know because I’ve provided the proof of this on this website that Wan Sokha is an alias for Wang Yaohui.

It’s my understanding at this moment Wang Yaohui is in America trying to drum up interest in an IPO for Eastern Bliss Group, although I cannot say for certain which stock exchange they are looking to float the company.

Notwithstanding the horror show of the accounts of their investments, I hope would be investors get to read this piece before parting with their cash.

It’s evident that SEATEL have massive problems with their operation in Cambodia which only appear to be worsening; many of the claims that EBG make in their offering document are just not true.

Should the IPO fail, then Vong Pech, Wang Yaohui and their cohorts could have some serious financial repercussions to deal with in Phnom Penh and Singapore.

However, this wasn’t the only Wang Yaohui related news I heard in Cambodia.

In my last article in my “Elusive Mr King” series, I made a reference to a bureaucrat named Li Wei being found guilty of taking bribes to provide assistance with real estate problems.

On March 18, it was reported in the Chinese news that Li Wei was sentenced to nine years in prison and a fine of RMB1M by a court in Tianjin.

The news goes on to report that the court took into account several things when sentencing Li – among them that he truthfully confessed his crimes and “reported other people’s major criminal acts” which was “verified to be true.”

No names are mentioned in that piece, but in Phnom Penh the rumours were flying that one person in particular is in real trouble and that there is a warrant out for this person’s arrest. The name mentioned was Wang Yaohui.

Now, this isn’t the first time Wang has been wanted for investigation in connection with a financial crime in China, and he will know well what he can do to stay out of Chinese hands.

However, it doesn’t make his life easy.

Hong Kong is now completely out of bounds for him as he would be grabbed there by the Chinese police; I have a feeling even Cambodia might not be safe for him. That restriction on his movement (and potentially his money) could be very problematic.

What does this all mean for Blues?

In short, none of it is good news. While the EFL seem uninterested in anything I have to say about Wang Yaohui or Vong Pech, it’s clear that there are regulatory authorities who are interested in what they are doing.

I’ve long had a feeling that Cambodia is key to their current business plans – and if they have overstretched themselves there then that could quickly rebound on what they can put into BSH and BCFC.

The fact that I have heard of current ongoing legal issues for Wang Yaohui in three different jurisdictions doesn’t fill me with confidence either. I might be the only person reporting on him at this moment but I do get a feeling that might not be the case forever – and the more public his activities and issues become, the more problematic it becomes for Blues.

Things at St Andrew’s seem to be okay; bills are being paid and plans seem to be in place to fix things like the Stadium. It’s imperative that BCFC can continue to secure the funding from BSH to do this – and if BSH or it’s investors cannot provide this funding, then they really have to sell now, because it’s only going to get worse.

One thought on “Almajir in Cambodia – Vong Pech and Wang Yaohui”