Once again, takeover fever is in abundance in Birmingham City fans. According to the Mirror, even the grammatical tense surrounding the takeover has changed with reports that Laurence Bassini has bought the club. With lots of rumour flying around and precious little actual information I wanted to put together some reasoned thoughts on what the hell is going on.

I’m going to be brutally honest here and admit my bias ahead of this piece, as I think it’s only fair that people understand my words might be coloured by my feelings.

As I’ve said before, I think a staged deal for the club is no good, but that combined with a purchaser who has twice been bankrupt and also banned from owning a club for three years by the EFL just makes this deal a horror show for me.

I’ll say it straight out so there is no ambiguity – I hope with every ounce of my soul that this deal does not happen.

I’m well aware of people who think that “anything would be better than the current situation”; I’m not one of them and I think this would only be jumping from a smoking frying pan into a raging fire.

What has been reported

There are reports in two national newspapers from journalists who I respect – John Percy of the Telegraph and Neil Moxley in the Mirror.

I’m quite surprised by how deep Moxley has gone again on this.

There is no mention of Bassini but the headline states that Blues are under new ownership after contracts have been exchanged. It says that after the finalities have been concluded, the EFL will be approached and regulatory approval will be sought – and should be a formality.

The Moxley report goes on to state:

“The purchase itself is complicated. Initially, a minority stake of 30 per cent has been taken with the transfer of the rest of the ownership to be completed over a period of time. Funds are available and ready to be transferred once a date for completion has been set.”

In the Telegraph, Percy names Bassini as the incoming owner, stating that Bassini has told of “massive changes” if he assumes control. It confirms that the takeover is subject to EFL approval and that Bassini will not be on the board and that he is confident that the directors appointed will be cleared.

Percy names David Sullivan as the financial backer of Bassini, saying that he understands that Sullivan has loaned money to Bassini but will have no further involvement due to the rules surrounding dual control of clubs.
Bassini is quoted as saying

“I’m not in this for my ego, I want it to succeed and there is a three-year timescale.”

There is scant other detail, which doesn’t help trying to work out exactly what will happen and when – or even how.

I’m not going to lie, Monday was a tough day for me personally.

Tough because the day I return from vacation my phone is once again buzzing like a angry wasp on steroids – and tough because I don’t know the answers to many questions I’ve received.

First of all, there is the structure of the deal.

Moxley’s piece says that the incoming owner will purchase 30% of the club up front with the transfer of the ownership over a period of time. Percy’s piece doesn’t mention any structure at all.

It doesn’t make any sense to me that Bassini would buy 30% up front. To do that he would either need to buy the entire Oriental Rainbow Investments stake of 21.64% and then a further 8.36% from Birmingham Sports Holdings to make up the total 30%.

While there wouldn’t need to be shareholder approval to announce that, there would have to be an announcement made to the Hong Kong Stock Exchange by BSH that they had sold another slice of the club.

What I think would be more likely is that Bassini would buy Oriental Rainbow Investments from Vong Pech lock stock and barrel, which would transfer 21.64% of the club and 25% of the stadium into his hands.

As ORI are based in the British Virgin Islands, that could be done with minimal transparency, and I suspect only the most cursory of announcements would need to be made to the HKSE about it.

However, if there is an irrevocable contract for the remainder to be purchased in time from BSH, that would need to be announced and confirmed to shareholders.

What concerns me is that the agreement to buy the rest would be some sort of verbal or gentleman’s agreement, which in my eyes means the square root of FA and only opens the club up to another mess down the line.

Secondly there is the matter of the Owners and Directors Test.

While Bassini has asserted he won’t be director, it’s my impression that he would still have to take the test regardless.

Any person who can exert financial control over an EFL football club must take the test – and one would think if Bassini was the incoming “owner” that’s the control he would have.

It’s a similar argument to the reason Wang Yaohui (aka the elusive Mr King) should have taken the test years ago – because he exerts financial control over the club.

There has been no real mention in the press of people on the board apart from Keith Harris; however I understand from my own contacts that another major player on the board would be Kaushik Amlani.

Amlani is a director of the imaginatively named Bassini Board Limited, a company founded in March of this year which is owned by Bassini.

There are a couple of other interesting names on the board of that company.

Chris Farnell is a solicitor who has had more than his fair share of scrapes with ownership issues, while William Osmond is the senior partner at Osmond and Osmond solicitors in London where he is the firm’s Money Laundering Reporting Officer.

Amlani is an interesting person in himself. 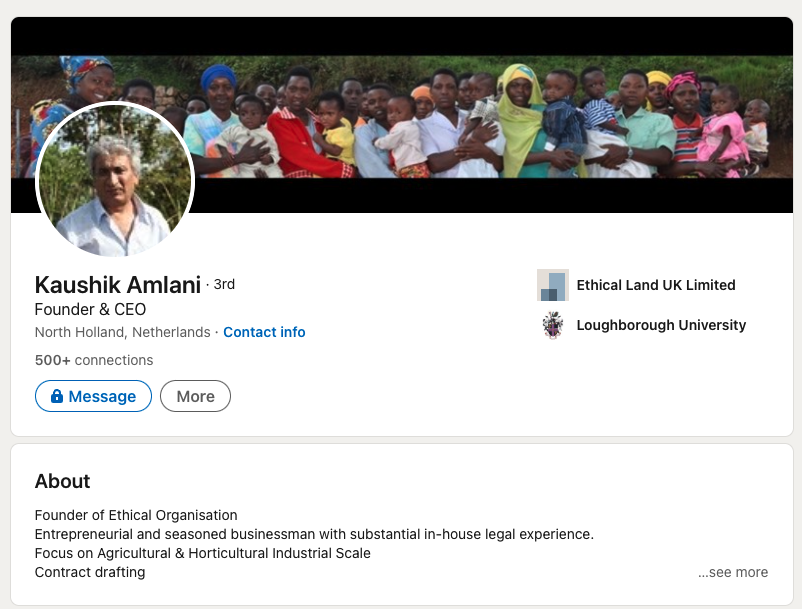 His Linkedin profile talks about his work with Ethical Land UK Ltd. A search of Companies House shows this company was struck off nearly eight years ago with no accounts seemingly ever filed.

I’ve found a total of 14 companies associated with Amlani, and of those eight have been dissolved over the last eight years, in many cases without ever having posted accounts. A further two are dormant, with only a pharmacists being active along with the aforementioned Bassini Board Limited.

I have to admit on the surface it doesn’t look that impressive if Amlani is indeed involved.

Thirdly, there is the issue of control.

Regardless of whether Bassini buys 21.64% or 30% of Birmingham City plc, that wouldn’t give him a majority of shares needed for control.

I cannot understand how BSH would let Bassini and / or his appointees take control of their only major asset without some sort of irrevocable contract that they will fulfil the purchase within a set time period.

My only feeling is that the Vong Pech part needs to be sold not because BSH need the cash, but because Vong Pech / Wang Yaohui do. I’ve seen evidence that they owe US$16M to investors of their stricken mobile phone company SEATEL and a quick sale of ORI would help to relieve some of that debt issue.

Assuming that it happens, it would mean for a time at least that BCFC has as part-owners both Laurence Bassini and Wang Yaohui. I can’t see that as a solution to any problems the club has; if anything it’s only going to make things worse.

It might be just me being in denial, but as it stands I cannot see how this deal can be completed.

From talking to other more experienced and connected people this deal has red flags all over it. I’m led to believe that the EFL find many of the people mentioned above as problematic which could make the OADT not the formality that has been reported.

I’m also concerned about finances. From talking to a legal friend I’m led to believe that to clear things with the EFL one would need to show not only proof of funding the entire purchase but also the next year of playing – circa £65m. I’m unsure where Bassini would have his hands on this.

What concerns me most is this feeling expressed by some fans online that this is Blues last or only chance at a takeover.

This is absolutely not true, and there is an argument that Bassini is only making matters worse by negotiating this shit deal on offer from BSH, which is preventing them from backing down and talking to better bidders about something more reasonable.

I hope that answers to some questions are delivered to fans who are hoping against hope that a takeover will happen – and that those answers are considered satisfactory.

As I said above, it’s my hope that this is all another figment of Bassini’s vivid imagination; if this story is true than I can only reaffirm my absolute desire to retire from writing about Blues once the deal is confirmed.