“Financial Armageddon” screamed the headline. Ten clubs under a transfer embargo with the EFL, of which Birmingham City was one. The article from the Daily Mail appears to have gone, but the backlash hasn’t, with Coventry City, Luton Town and Cardiff City all issuing statements refuting the story. Was it all just a storm in a teacup or is there more to read into this?

As Blues fans, we’re quite hardened to headlines about alleged issues at the club. This week alone we’ve had a story about Blues Women making a written complaint to the board, with the FA looking into concerns.

A story about a possible transfer embargo is just another couple of drops of sauce to an already simmering pot of seethe towards the board at Blues. We’ve already been there, got the t-shirt and had the points deducted after all.

As it turns out, the embargoes against clubs appear to be for administrative reasons rather than financial ones.

The coronavirus pandemic has meant the Government have given companies an extra three months to file accounts this financial year, which has helped to reduce the pressure on companies to get their documents in.

Unfortunately, this three-month extension hasn’t been matched by the EFL, and as such clubs who have not got their accounts in before the end of March have found themselves punished despite not breaking any rules.

It all seems a bit daft, especially as the EFL asks for things like cashflow forecasts for the next season in addition to standard accounts. One can only imagine how hard it is to model financial futures when no one knows what is going to happen for sure in the next 12 weeks, let alone 12 months.

It’s especially daft considering the EFL have utilised that three-month extension themselves for their own accounts.

One would think the sensible thing for Blues to have done would have been to follow the lead of the other clubs and make a similar statement; that there is nothing financially wrong at the club, that accounts will be published in due course, yadda yadda yadda.

However, Blues are in a slightly different position. 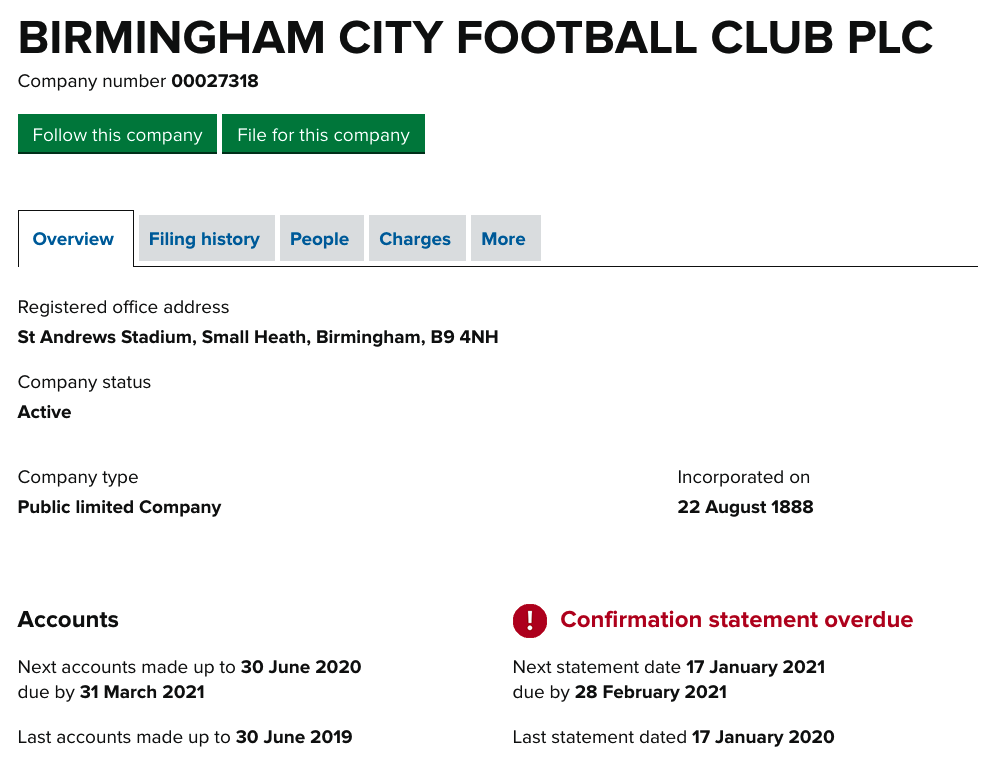 While this means that they’re late, they’re not showing as such yet by Companies House; the reason I think is that there is a little bit of leeway allowed due to public holidays and lag to publish.

However, I see no reason that Blues should be late filing their accounts.

Birmingham Sports Holdings are under much stricter pressures and had to file their accounts for last season by September 30, 2020, which they did. Those accounts would have had to include full figures from the club, and indeed segmented information was shown in the audited accounts.

In fact, BSH have filed accounts for the first six months of this season, albeit unaudited.

Therefore it seems logical that the required data has been collated by the club. The only reason I can imagine that they’ve not been filed with Companies House is that the auditors in Birmingham have yet to sign off the full figures here, which doesn’t fill me with confidence.

The confirmation statement shows who are the shareholders for the club and for the UK parent company.

Admitted, the UK parent company’s confirmation statement is 45 pages long and has to track any changes in the few shares outside of the control of Birmingham Sports Holdings, Trillion Trophy Asia and Oriental Rainbow Investments.

However, the club’s confirmation statement is a literal one-page affair as the whole of the club is owned by Birmingham City plc. To file the statement takes 30 seconds online and costs £12 – it seems somewhat negligent to not have done so within a month of the due date.

There’s no fine for filing a confirmation statement late; indeed the fine for being late with accounts is chicken feed in comparison to sums spent by the club.

However, it never looks good to be late with these things from a financial perspective. It all adds to the issues created by the CCJs the club has to make the club a less than attractive prospect to do business with.

Even with all that taken into account, a few minutes sorting out stuff online and a statement could have helped to resolve the situation quickly for the club.

Right now, the “optics” for the club aren’t great. We’ve had issues with the stadium, the academy and the women’s team – all of which are unresolved as it stands.

This could have been an easy PR win for the club to reflect blame back at a party which deserved it – and maybe to take some of the pressure from people at the club.

Instead, we get a sullen silence which only inflames the seethe online.

The club found out to its cost in 2018 that some rules cannot be ignored even if they appear broken; and that not playing “the game” can leave the club a pariah among its peers.

It’s not time to make that mistake again.