Last week I visited Phnom Penh, Cambodia to attempt to understand and report more about the convoluted ownership of Birmingham City. While the appointment of Ian Dutton as Managing Director in Birmingham has bought some much needed change to the way the club Is being run on a day-to-day level, I wanted to learn more about the owners above him; who they are and what their intentions are. 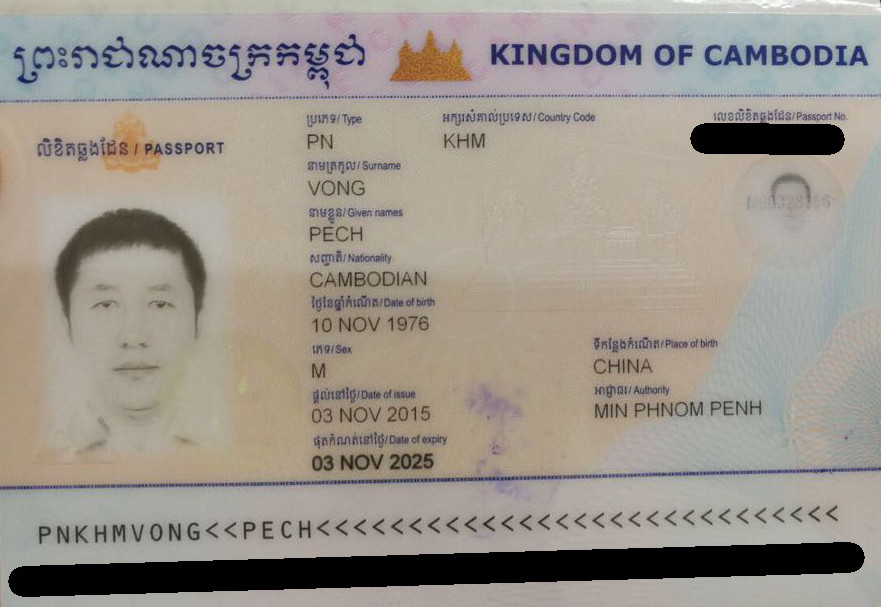 Over the last couple of years since Vong Pech bought a stake in Birmingham Sports Holdings, I have tried to obtain information online about him and his businesses with limited success.

While Cambodia does have limited company information available online, I had long felt that only by visiting the country could I properly understand who Vong Pech is; what his businesses do and why he is involved with BCFC.

When I planned this trip to Phnom Penh, I came up with three aims.

In this first piece of three I am publishing during the international break, I will attempt to answer the first point.

I’m also planning to do a video Q&A session in the next couple of weeks with Mark Watson from the Fat Lads Go In Goal podcast / We Are Birmingham to help answer questions better.

Remind us, who is Vong Pech?

Vong Pech is the person with the largest financial interest in Birmingham City currently.

In addition to this, Birmingham City FC owe ORI around £22.45M as per the last BSH interim accounts.

While Paul Suen Cho Hung has a larger stake in BSH, there is no one person with a larger official interest in the club as a whole. This means that Vong Pech is a very important part of the ownership jigsaw puzzle.

Yet despite this, we know very little about him. There is little information released by the club and BSH, and a little bit more available online.

Vong Pech has never addressed the fans; has never spoken once about why he has bought a direct chunk of the club or the stadium and has done nothing to reassure fans he has no desire to recall the £22.45M the club owes his company any time soon.

I had an idea that when I got to Phnom Penh, that Vong Pech would at least be a name that people had heard of. 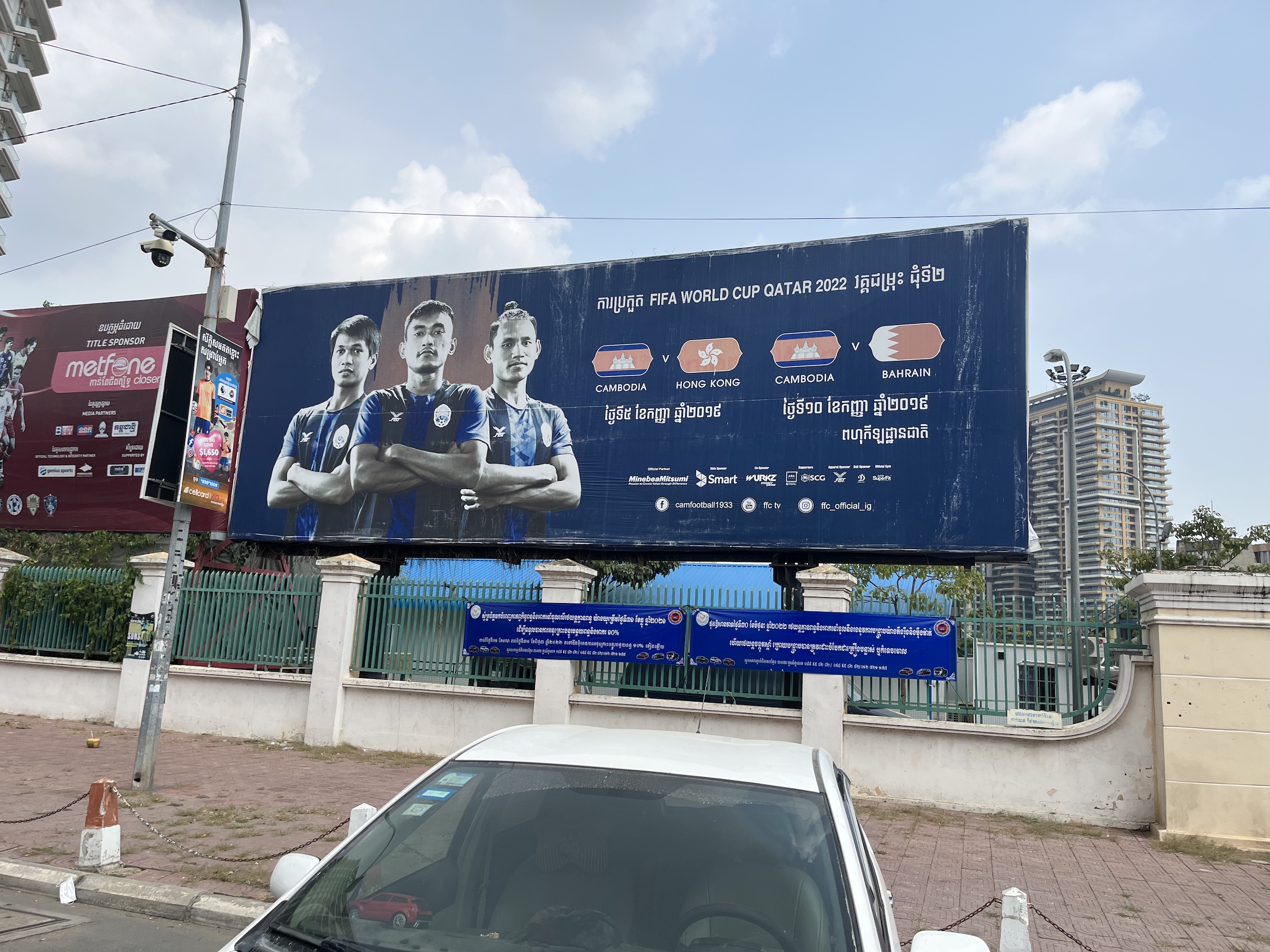 It was clear that football is a popular sport in Cambodia.

Unfortunately, thanks to Covid the national stadium was closed when I went to take a look, and I wasn’t in town long enough to catch a Cambodian Premier League game.

Yet the bars in the main drinking areas advertised having big European games on despite the huge time difference; I saw a fair few of the big European club shirts being worn by locals in Phnom Penh; there were even people wearing the Cambodian national team shirt at Phnom Penh airport.

While I get Blues are not the same level as a Liverpool or a Real Madrid, one would think that some sort of noise would be made about a Cambodian person owning a large stake in an English club.

The sad fact is most locals hadn’t heard of Blues or Vong Pech.

In a land where the news is pretty heavily censored, neither Birmingham City nor its Cambodian part-owner has broken into the national conscience.

In honesty, the whole concept of Europe is pretty abstract out there; I had more than one local ask me if I lived close to Ukraine and the war because they simply didn’t know how big Europe is or the countries in it.

With the club in need of a lot of money for both the team and the stadium; and ORI on the hook to pay any losses incurred by the club while in the Championship to BSH I figured it might be an idea to understand how much money Vong Pech has.

Estimating wealth is not an easy task anywhere in the world.

The easiest way to find out how the wealth of a person is when assets they own are publicly known. For example, if a Russian oligarch owns a £300M yacht, then it’s pretty easy to add £300M to their total. Likewise, if an American billionaire owns publicly a stake in a publicly traded company, then the value of their shares is easily calculated.

However, most assets are not publicly owned in this way. Money and assets are squirrelled away into countries which offer privacy and tax efficiency. Even public assets are held via holding companies and investment vehicles, making it harder for the average Joe to understand who owns what.

Cambodia is a case in point. Take this house for example. 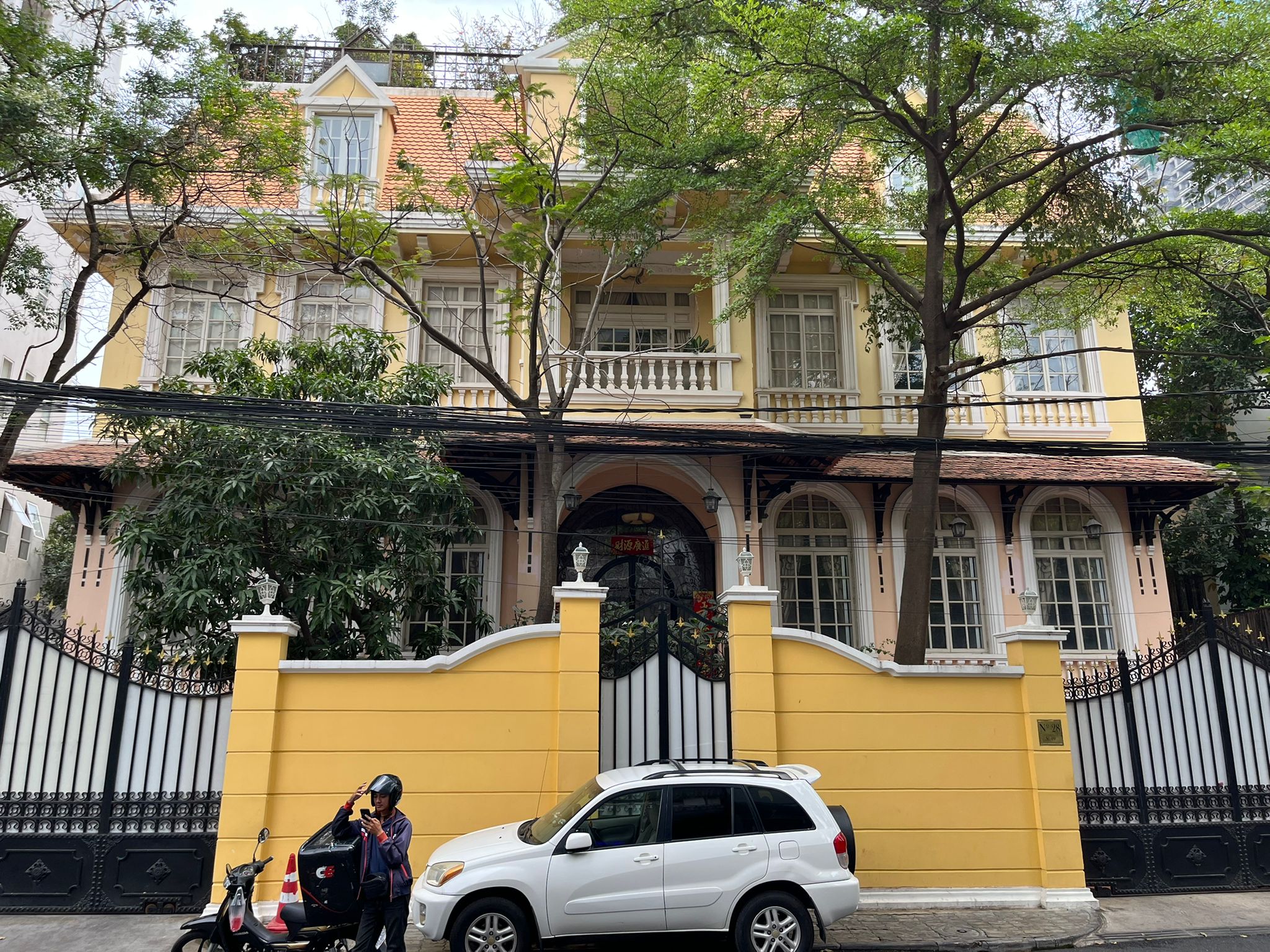 The people I met in Cambodia told me that it’s likely that this house is owned by Vong Pech.

I knew of its existence prior to my visit due to a loan document in my possession which gives it as the Cambodian address for BSH Chairman Zhao Wenqing, which I published in this article at the end of January.

According to the OpenCorporates website this house is listed as the registered address for a couple of Cambodian companies owned by a guy called Wan Sokha, which we know from the diplomatic passport is the Cambodian alias for Wang Yaohui.

In the UK, with a full address I can find out who owns the property by paying £3 to the Land Registry and submitting a form to pull the title deeds.

There is no online list of who owns what, and to obtain the information one has to pay a much larger fee to conduct a search – I was quoted well over US$500 for this.

Furthermore, as happens in the UK, rich people sometimes don’t own properties in their own name. It’s easily possible had I coughed up the money required for the search that I’d have found out this house was owned by a Cambodian chauffeur for someone.

However, there is a long list of companies which Vong Pech is listed as a director for, and in my next article I will write more about who they are, what they do and how successful they are.

Is Vong Pech who he says he is?

This is the most vital question for me – and thankfully one that I can answer.

Regular readers will have heard me mention in the past that I have heard rumours that Vong Pech wasn’t the name he was born with. This makes sense to me as his passport lists that he was born in China – but getting further details online has proved to be fruitless.

My trip to Cambodia has changed that. 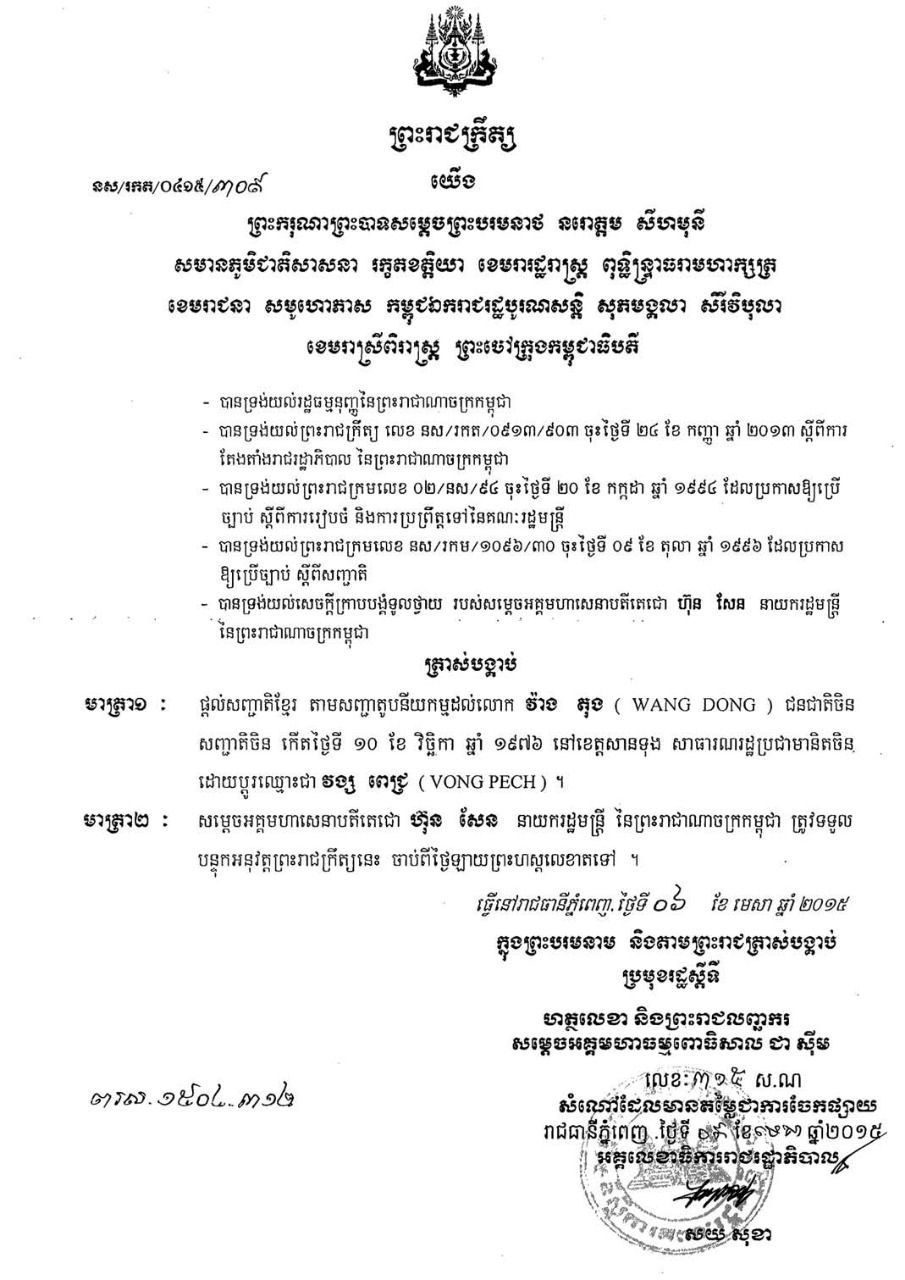 Now, I expect that the average reader of this website’s Khmer is about as good as mine ie non-existent; however I have a translation of the pertinent parts below.

The picture above is a royal decree, confirming the naturalisation and name change of a Chinese citizen named Wang Dong to Vong Pech.

Thanks to the fact I have a copy of his passport above, we can check that the date of birth is the same as the one in the passport. We can further back that up by checking Birmingham City Stadium Ltd, where Vong Pech has given November 1976 as his month of birth.

This means we now have absolute confirmation that Vong Pech has at least one other name.

While I understand he gave up his Chinese nationality to be able to run businesses that he does in Cambodia, I am fairly sure that Vong Pech has not offered any information to the EFL about his previous identity. I have emailed the EFL this morning to ask them this question.

This is particularly pertinent as I know from my visit to Cambodia that Vong Pech is still running businesses there using his former Chinese identity – something else I will come to in my next piece.

I should point out that the name Dong has nothing to do with former Blues CEO Ren Xuandong; it just means that Vong Pech was born with a similar given name to Ren.

However, while 92million people in mainland China have the surname Wang, I felt I had to address the rumour that Vong Pech was related to Wang Yaohui and I will come to this in one of my later pieces where I can talk about it in full.

What does this mean for Blues?

I know from unhappy past experience the EFL have ignored information I have given them about the owners of the club, referring me back to the club in a couple of cases.

However, despite the reticence of the EFL to seemingly do their jobs properly, I think that this proof is not good for the owners. If, as I suspect, there has been no information submitted to the EFL about Vong Pech’s former identities then I think there is a compliance issue, particularly as I know Vong Pech is using the Wang Dong identity with at least one company if not more.

Furthermore, if Vong Pech hasn’t provided this information, then the question is what other information he has withheld?

Finally, from my understanding of the Fan Led Review, one of the main changes is that rather than the EFL conducting the Owners and Directors Test, that responsibility would move to the National Crime Agency, who I suspect would be a bit more diligent about current and future owners.

This means if the Fan Led Review is indeed implemented, there could be some very difficult immediate questions to answer for Birmingham City and the club’s owners.

One thought on “Almajir in Cambodia: Who is Vong Pech?”